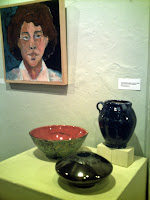 Taught at Ellerslie by Sundiata Stewart, the English lass of Barbadian parentage saw her capabilities not only nurtured but pushed to be all they could possibly be…

Thus Christine Hinds-Wellman became versed in handling clay and porcelain; being an avid illustrator; a three dimensional collager; painting – abstract and portrait; as well as photographer. 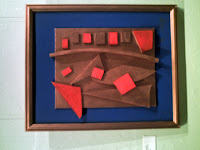 Christine’s illustrative style reminds me of a slightly different version of Aubrey Beardsley, and her skill with clay and porcelain easily fits in with standards experienced at Lladro, Limoges or Wedgwood! 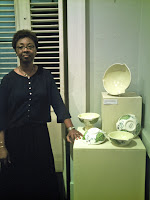 When I spoke with her before the official launch Mrs Wellman says she tends to avoid attempting to assay what is deemed as traditional sculpture, and the series she had the most fun with was the Assemblages Homage series which she created while being a teacher in Bermuda.

She says she would beg the janitors not to sweep up after the woodwork class as she took up stray bits and cuttings then combine them into living mosaics as she calls them.

If she wanted to finish a picture quickly then she’d use a glue gun, but most times she liked to savour the making of a new Assemblages and would use Elmer’s Glue although it took longer to set.

At the actual launch she observed it is easier to move art from Bermuda to the USA or UK than within the Caribbean. Singing her praises was curator Janice Whittle and Omowale Stewart (who was there on behalf of his twin brother, Sundiata).

Her husband is part of Bermuda’s Tourism Board and as a result,

she gave baby blue and sea green rubber bracelets with Bermuda shorts etched on them as a gift to patrons for the launch of her Catalyst exhibit at the Queen’s Park Gallery which runs until the 4th of August – just before Kadooment. It’s worth your while, and most pieces are tagged at a reasonable rate!