The life and vast contributions of Renee Digiulio-Naismith were celebrated in song, dance and poetry at the opening of the Youth Department?s Summer Residential Camp on Sunday.

St Kitt’s Deputy Prime Minister and Minister of Education Sam Condor was among persons paying tribute to Renee at the Zion Moravian Church in Basseterre, who was described as ?naturally caring and giving and a servant of God and children.?

That spirit was evident in the region as she used the resources of the Naismith International Basketball Foundation (NIBF) and her links as a travel agent to generate support for the continued growth and expansion of the Department of Youth?s Summer Residential Camp.

Her efforts were successful as she raised tens of thousands of dollars every year in her home state of Chicago, U.S.A. and facilitated the participation of children throughout the Caribbean in the educational camp.

Although much was done, there was more yet to do. That work will now have to be continued by her husband Ian (pronounced Yon) Naismith as Renee died on February 21, 2007 from breast cancer. 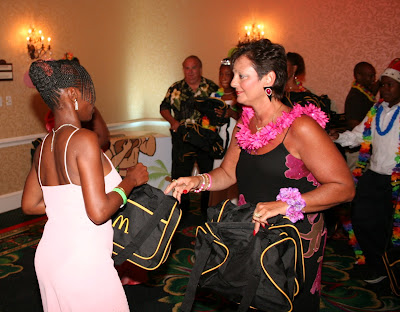 ?Renee loved kids and she loved St. Kitts,? Ian told SKNIS. ?It was her home away from home.?

The couple?s plan to wed in St. Kitts at this year?s camp, after 10 years of engagement hints at the affection both have for the country. Unfortunately, the excitement of a Caribbean wedding had to be replaced with a small ceremony in a room at the Rush University Medical Center in Chicago. Eleven days later she lost her long and valiant battle with cancer at the age of 50.

Renee couldn?t interact with the children the way she loved to because her immune system was weakened from a recent session of chemo therapy. However, she worked tirelessly behind the scenes to ensure the children had the time of their lives.

Director of Youth Geoffrey Hanley explained earlier this year, while Renee lay sick in the hospital bed, she frequently telephoned officials to make arrangements for the 2007 camp. Excerpts from her diary were the most telling.

On February 20th she wrote, ?Lord with your help, I can get my strength and health back to go back to helping others and the kids at the camp. I love to do what I am doing.?

?We miss her dearly,? a former camper who is now serving as a camp/dorm leader said. ?Renee was an inspiration and it won?t be the same without her.?

With the renaming of the camp in her honor and the ongoing fulfillment of a wish list of things she envisioned for the camp, her memory shall be preserved.

The lasting legacy of Renee Digiulio-Naismith however can be found in the smiles and positive development of the many children she touched in St. Kitts and Nevis and throughout the world.