Barbadian & Trinidadian Poetry laid before a very appreciative audience in Fontabelle: They hunger for more

Adrian “Amenyama” Green is a poet with a purpose. His talent for verse was dormant until it was ignited by a burning passion to see Africans at home and abroad in particular, and the world in general, embrace the power of Afrakanity. 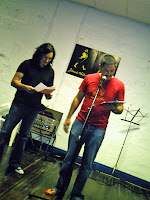 With the poetic fire lit, he has used every opportunity to spread the Gospel according to Garvey. His profound rants and duppy raising delivery have won him three local slam titles and a silver award at NIFCA.

That supercalifragilisticexpealidocious mouthful was the intro Amenyama expected Bajan rock-band Kite (JJ & Brian also of Mix-FM – update the website – fame were the emcees, they supported Dojangles in his early days and vice versa) to lick out not long ago at the Goddards Sports Club & Bar in Fontabelle when DJ Simmons’ Dojangles Productions launched its Riddim & Flo that played to a large audience recently.

The audience were treated to a variety of cultures – Bajan Yankee, Trini, Bajan Alternative and local poetry from differing perspectives.

Debbie Callender started the event, one of her poems was an imagined story she made up on 3 joggers she saw every day. Using an Army-type chant it spoke of 2 warriors chasing a god. 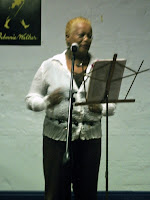 But the one she took the audience’s breath away with was the one about a little girl called Stella – a sexually abused child who when the violator seeks to go at her sister, she then looks to enforce justice her way – with a chilling permanence… All punctuated with a singing rhyme, the crowd was stunned then erupted into long applause.

Hip Hop had its place in the arena that night as Billy Kincaid let go a version of his Champions that Barry Chandler featured in and he also did the hit he performed with Shontelle Layne “Can I Take You Home Tonight?“

Then Kimani Mocha Jade set all the guys drooling even before she opened the mike, it seems the gal is a US citizen of Bajan parents – mentally, she appears to be still in her teens and as such it kind of shows in her prose; more hype and not enough social commentary but then, as I said the men didn’t care when she laid on a ditty about lusting after some guy who’s own presence seemed vague rather than ethereal. Of course, the fellows automatically assumed she meant THEM – yeah, right! 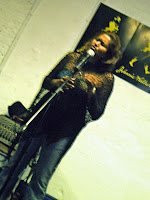 Well, she was a contender – Carol Hosein from Trinidad belted a TKO with “How To Suck a Mango” and there was bare ruction in the place! She was very calmly and smoothly reveasling the tale of a stake starch mango – that you should hold it at the tip with your teeth, suck ’til it turns white, man, by the time she finish reading every guy was at the edge of their seats and sitting funny… If you were there, you could have bought a copy of her cd “…So Suckin’ Sweet!“

After the sultry virtual sex, Adrian Green came in for the consciousness… “Deejays & Artists” is a rythmic chant begging such entities to create the cultural benchmarks and not just be sheep; by blindly following orders imitates oppression of centuries gone by. Amenyama also spoke between poems to give background and he says he and Dojangles have an ongoing friendly rivalry as “iron does sharpen iron” and then he went into his “Ancestors” that won at Le Mot Juste at Limelight Cafe back in May, he even got the audience to chant the chorus with him! 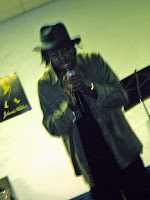 The man of the moment, DJ Simmons, appeared with flair – hat and all! He kept the audience on their toes cerebrally as well… It seems a new spoken word cd will be out soon; “Riddim & Flo, Vol. 2” and then he started with his appreciation of ALL females in “Woman“, we’re not talking sexually in the conventional sense but what women endure in pregnancy and where it leads in later years whether their offspring be good or bad.

Then he hit them with “Dah Cyan Happen Tuh Me” an AIDS commentary where a random night of lust with a faulty condom led to complete family disruption. He then examined why the colour black can have so many negative connotations and then countered it where black meant well – as in a tuxedo or Martial Arts or accounting (in the black means profit not loss)!

Tara James made a guest appearance with her brother Kas doing a poem against haters, but she clarified this was done before Rihanna blasted haters. 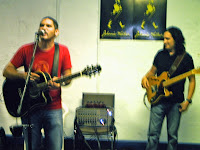 Kite kept the audience going with many of their staples such as “Firefly” used in Ghost Whisperer and “Macaroni Pie” a Don McLean take-off slated for their next album due after Kadooment – “Thirteen Degrees” (reference to Barbados’ geographical map location). The audience lapped it all up and probably expect to be at their launch!

Garvie of Opa fame was the night-watchman for this match and he tickled the crowd’s fancy with his own “ABC – a Barbadian alphabet” but he dumbed it down for the kids present and I respect that; he also had a go at Paul Keens-Douglas’ “I, Ball” and that’s when my chair went flying – what can I do? I say Garvie’s delivery bowled me over, LOL!

Spoke to Carol Hosein afterwards, she has no blog, no website, no MySpace – yet works at an Ad Agency, go figure! She has a BA in Theatre Arts and adores Nature and appreciates its sensuality and that’s why she could wax lyrical over the Caribbean fruit like she did… Yeah, right – LMAO!