What do Cotton, Bagasse and Banana Fibres have to do with each other? Papyrus! Bas-Relief from C. Ishmael: Sight Clash, Pt 1/2 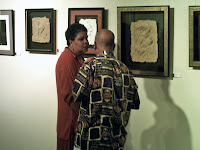 Christobel? Yes, but no! She definitely warms up to you better when you call her Chris, Ms Ishmael is one of a trio doing a simultaneous exhibition at the Errol Barrow Centre for Creative Imagination – Sight Clash 2007 on until month-end. Over the weekend, members of the public were given a chance to grill all three contributors for the fest and this week we’ll be revealing to you what we learned… 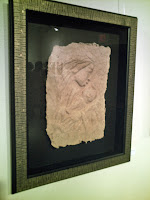 Since 2003 Chris Ishmael adopted the style of crafting hand-made papyrus to reflect her bas-relief or low-relief sculptures that are usually non-threatening issues like nude studies, mothers with infants or profiles of men and women.

If you see a resemblance to some of the tableaus afforded from Mary Cassatt of yesteryear, she will not bite your head off… In fact, she may nod in quick assent since in her view mothers with infants convey some of the most positive images the world needs right now.

Her technique starts with clay then transferred to plaster; then a mould is cast for which the papyrus can be modelled into. 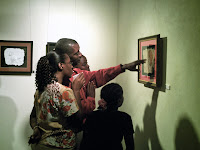 As she is just getting familiar with the technique, she is still on a quest to get crisper definition be it clay or papyrus.

Chris’ works have some of the lightest price tags in the show, so you have until Saturday to take advantage of the relative bargain – tip? It costs less out of the frame than in one, but the advantage is when framed by her, the gentle papyrus is well shielded from any unfortunate circumstances!