{UPDATE} Building Barbarees Gardens runs all night; the murder of 2 Mahogany Trees and calls to an MP unanswered – The Invasion Of Strathclyde, Pt 5

Those of you who track this News-Blog may be aware I have a platoon of cats, they’ve chased away bats, roaches and millipedes but can never catch Dr Boobies, Kingfishers or Wild Macaws who are usually too smart for that type of demise…

Kingfishers look a lot like the mascot of the Toronto Blue Jays, with their shrilling and trilling little cry – when I was in Hastings, I used to love seeing them dive-bomb for bread crumbs and snatch them before they hit the ground! Every now and again they still visit where I am even so close to the City…

Anyone can see sparrows or blackbirds (and those more observant realise they intermarry and there are little spackbirds or black-arrows flitting about too), but to glimpse at what Bajans may call a yellow-breast or Dr Booby sipping from a banana blossom is a treat indeed. Vincentians call them bananaquits, and they are fun to watch in action – 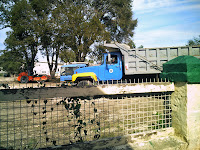 their saffron chests puffed and their tiny eyes darting around from their white strips on their black backs is rather comical as they help pollinate bananas.

The green and red wild macaws were my alarm clocks, seldom moving in smaller than a pack of three but more likely in fives or more; they would rest on the branches furthest from the ground – Ka Ka Kuh-Kly Kly! Their cry sure to wake the dead every morning between 5:45 to 6:15 am!

I miss them… Why? Not the cats as I said – rather, the building of Barbarees Gardens to relocate Emmerton residents proceeding apace – all through the night as well! Klieg lights and all! Yes, into the small hours my sleep gets disrupted by the generators keeping those klieg lights burning, all done without courtesy of a notice nor any Town Hall meeting!

It seems to be an ongoing collaboration between Rayside and CO Williams (both sides get really vex when I take pictures, tough), all through the night! 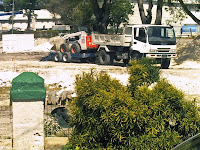 What about the Parliamentary Rep for this district? I left a number of calls on the Voice Mail at his Constituency Office, but heard no further from his secretary Heather Greaves… I discovered I had a cell number for the man – but when I called, there was Howaida Moussa-Weel’s dulcet tones to let me know that -“Incoming calls have been restricted to this number – I.D. 16“!

It seems that the Smalls, Clarkes and my household are just the right amount if folk to suffer – the rest of Strathclyde couldn’t care less as they are not bothered since it is not near them. What’s seven votes for a man hardly seen in this district? 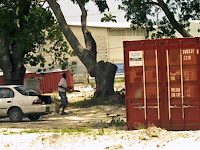 So, the wild macaws – why do they shun here? It may well be due to the fact that not even one but TWO mahogany trees were butchered before they saw their prime! I was sick on Friday, and my wife rushes into the house to say how the trees were being cut. So I grabbed my trusty 5 megapixel digi-camera and snapped away as they murdered history!

I was not the only Strathclyde resident to mourn their passing, on the following day, Saturday 16th, Janice Small and I spoke for two hours learning what frustrations the Smalls endured too! Imagine, I was here from seven years ago, but the Smalls lived here from 1983…

Janice Small said she cried for hours, and is now waiting to see what happens to the third mahogany tree which is close to her land, as the roots run under her property!

She has no expectations about the MP now in charge for this area – in her view, he does not have to care since it is not near him! She does not want to move (like me), but shudders to think over what new residents from Emmerton will be like! Mrs Small wonders if Reverend Atherley truly realises or even if he cares as to what quality of person will be imported from Emmerton? 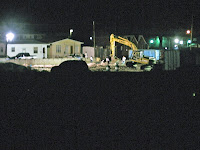 Janice revealed the original piece of land between her home and mine was a huge house with a tennis-court owned by the Boyce of legal firm Yearwood & Boyce.

She also thinks this form of construction is against the original covenant for Strathclyde. Yet no warning nor Town Hall meeting nor any idea of what was to come was conveyed by the current MP for the area – she says she has never seen the Reverend Atherley and could not care less any more, even if he changed his mind and appeared with a Town Hall notice!

Mrs Small added the plot between us was eventually bought over by D’arcy Scott who shifted it to Budg-Buy and this was sold by Forde’s realty to Government. Mrs Small said she hopes the current developers have to realise they MUST adhere to the six-foot boundary from our houses to where the property is being developed and also whatever boundary restrictions apply to creating a road from out by AS Bryden to Strathclyde! 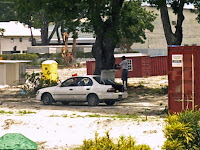 Like yours truly, she has heard of certain tales from that area where drugs and Police raids are the norm, and what will this do to property values here? Will we be compensated? Is this to punish the area for the reputation Strathclyde used to have? Nowadays, Strathclyde is more integrated than the CSME and some ppl are only hoping to destroy a racist myth which was true, but no longer applicable!

What good is a Parliamentary representative if we have not seen him for the last two terms he has been operating here? In 2003, residents appealed for humps to be laid on the straight side road of Strathclyde to stop motorists from speeding and he never saw fit to visit personally, just send some reps through the district! By the way – we’re still waiting for the humps!!

I saw the MP at the opening of Hit for Six! at the Olympus, but he snubbed me at the gala – I thought it was my imagination until the Deputy Prime Minister saw me and shouted “Hi, Ian! How are you?” If she can speak, why not him? 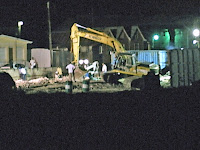 I even called the National Trust and Town & Country Planning today – what a great way to waste time! William Gollop is not sure if where I live is a place of historical interest and says no study has been done since the 80’s… If I’m lucky – my place MAY get a plaque saying this is of national interest!

Town & Country says they cannot advise me unless the National Trust admits my home is of historical significance (Well, this place withstood Hurricane Janet and the 1937 riots, what do YOU think? It still has wide floorboards and original storm-shutters!) and any construction next door had to be approved since this is being built by National Housing. If I have a beef with their constructing overnight then I have to contact them! 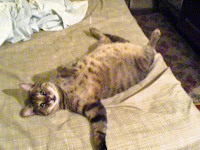 What do my cats have to say over the destruction of what was once their playground? According to my wife, when she came home from the pharmacy with Excedrin for me on the same evening they chopped the mahoganies, she saw Strypes our alpha male out on the lot close to the whirring cement mixers and trucks doing his business and walking off flicking his tail at them! She laughed, imagining him muttering, “FRIG YOU, MAN! FRIG YOU!!“ 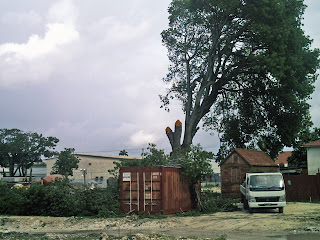 A top planning official believes that Barbados has a rich potential for successful heritage tourism but the old traditional buildings must be well preserved and maintained. 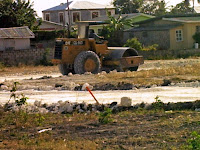 Chief town planner, Mark Cummings has told the annual general meeting of the Barbados National Trust that over the years the planning system has been supportive of this country’s cultural heritage.He says the amended physical development plan 2003 outlines policies, goals and objectives aimed at preserving Barbados’ heritage. Mr. Cummins has disclosed that the character of Strathclyde in St. Michael is also to be retained. He says a development plan for that area is being prepared and it will be retained as predominately residential.

Don’t you just love Strathclyde’s current residential plan? BTW: I saw seven wild macaws over the QEH this evening, heard them before I saw them – yup, they were on a flight path AWAY from Strathclyde…

If birds of a feather flew away together despite Heritage Tourism plans than you know what is being suggested is as solid as what the birds do to cars!