Trinidad and Tobago?s Soca Warriors deservedly won the first Digicel Shield in the most dramatic of fashions as they prepared in great fashion to leave for their opening games in the CONCACAF Gold Cup 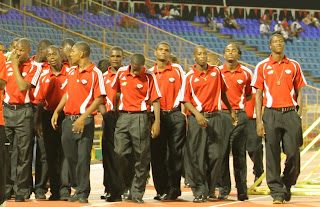 Mexico started strongly in the opening few minutes of this first Digicel Shield Final and were obviously intent in trying to take an early advantage and silence a very sizeable home crowd.

However, the soca warriors had other ideas and took the lead after only 5 minutes.

After being fouled 30 yards from goal, Trent Noel showed very quick thinking by cleverly placing the ball dead immediately and catching the retreating Mexican defense off guard by chipping a delightful ball over the head for Errol McFarlane get a hold of.

McFarlane still had a lot to do, but the big man took a great first touch, held off two defenders, calmly rounded the onrushing keeper and slotted home Trinidad?s opener.

McFarlane was proving to be a handful for the Mexicans as he held the ball up and brought people into play more times than not throughout the opening period.

Indeed McFarlane showed have made it 2 when on 24 minutes he only partially connected from a cross by Andre Toussaint on the left which did little to trouble Arias in the Mexican goal. 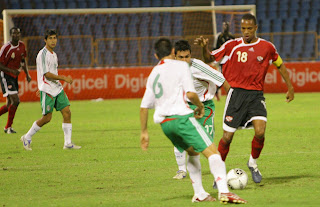 Mexico, who were showing themselves as more than competent in their technical ability, knocked the ball around to good effect but seemed to be lacking that decisive breakthrough in their play.

The biggest example of this came on 34 minutes when Ever Guzman fed a beautiful ball to Israel Vergas who cut inside the left back, continued his mazy dribble into the box, and cut the ball across the face of goal only for the entire Mexican team to look on helplessly as the ball simply rolled across an empty Trinidad goal with no-one to apply a decisive touch to put it into an open net.

3 minutes into the second half and Mexico did draw level. After a dangerous cross came in from Alejandro Berber, Seon Power somehow managed to punch the ball to safety when his intention was obviously to head it clear. Power, who was fortunate to escape with a yellow card and not a red, was unfortunate enough to have to watch Mexico?s Alan Zamora clinically dispatch the spot kick to bring parity to the game.

The soca warriors seemed to burst into action from here and over the next 15 minutes went close to restoring the lead on more than one occasion. Firstly the impressive Andre Toussaint brought a fine save from Arias and his daisy cutter from the left hand side of the box seemed sure to lodge just inside the far right hand post. Arias showed great agility however as he stretched full length to tip Toussaint?s effort just around the post.

Substitute Silvio Spann, only on the pitch a matter of minutes, was next up to test Arias as his powerful 30 yard free kick was too hot to handle for the Mexican custodian as he had to take two attempts to secure it in his grasp. 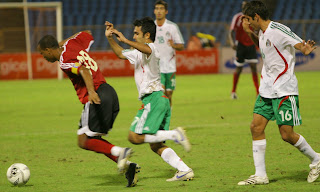 The game really opened up from then with Trinidad being urged on by an eager home crowd they drove forward in search of finding a way past Arias. This seemed to leave holes down the middle of the park and the technically gifted Mexicans were looking sharp as they counter attacked with purpose at every opportunity.

Spann, who showed what he could do in dead ball situations when he scored the goal of the tournament in the Digicel Caribbean Cup final, almost replicated his effort from last January but unfortunately for the soca warriors his 25 yard effort just did not come down far enough on this occasion as it grazed the Mexican crossbar.

With the game in injury time at the end of the regulated 90 minutes, super sub Darryl Roberts came up with the match winner in real fairy tale circumstances. The soca warriors won a free kick close to the half way line and when they floated it in the Mexicans all ran out looking to the linesman?s offside flag which never appeared. 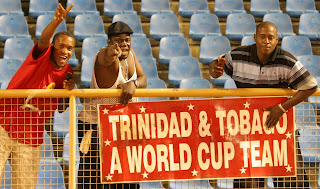 Roberts seemed to be the only calm man in the stadium as he chested the ball beautifully and coolly dispatched his effort to the back of the net past the onrushing Arias.

No sooner had the game commenced again than referee Royon Small blew for full time to the delight of the now crazy 7,000 strong home crowd. 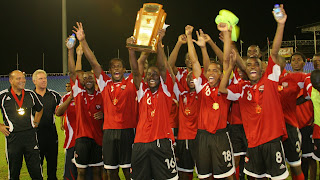