By popular demand, the Faculty of Humanities & Education and cave hill theatre workshop present the return of David Mamet’s Oleanna for THREE NIGHTS ONLY at UWI’s Errol Barrow Centre for Creative Imagination. Masterfully directed by the workshop leader Rob Leyshon and ably assisted by CBC’s own Andre Harewood, featuring Trinidadian Margaret Johnston and the multi-talented Sean Field, Oleanna‘s first run back in March united the critics in praise. 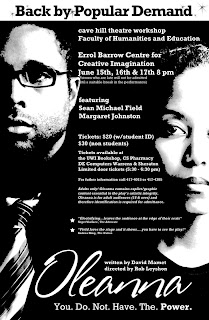 Entertainment Journalist of the Year, the Nation newspaper’s own Andrea King, says ‘Field loves the stage and it shows….you have to see the play!’ The Advocate‘s Nigel Wallace called it ‘Electrifying…leaves the audience at the edge of their seats’, saying ‘Oleanna has done its Caribbean premiere proud’.

Powerful enough to bring New York audiences to blows, Oleanna ranks as one of the great plays of the 20th century because of its ability to polarise those it touches.

There is no middle ground, no room for compromise. No surrender, no retreat. Choose sides and place your bets.

Andrea King labelled the March production “intimate….relevant...topical….definitely worth holding over’. And so we have! The battle rages on June 15th, 16th and 17 th.