Havana gives tribute to Eminent Barbadian Author – George Lamming is 80 not out! 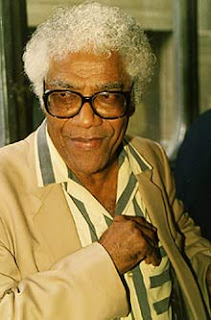 Everyone knows “In The Castle Of My Skin” whether through school or otherwise, it is the landmark tome of George Lamming, a Barbadian writer who makes the parish of St Joseph his home…

Since Thursday he became 80 years old and it is not Barbados but Cuba which honoured him on such a landmark occasion, where they acknowledge other works from the esteemed Bajan; “Coming, coming home” and “The pleasure of exile” The rest of the info hails from the Mathaba News Agency–

The opening ceremony at the Casa de las Americas cultural institution [included] the screening of an audiovisual presentation on Lamming’s participation in several events and meetings held at the host institution, {according to} director of the Center of Caribbean Studies, Yolanda Wood.
The event, which [was] attended by Cuban and foreign academics, will center in the life and work of this renowned poet, playwright, novelist and essayist, who was the author of several classics of regional literature. 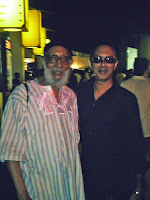 My curiosity is this… Why didn’t Barbados initiate this honour? I am not saying for Havana to stay out of it, rather Barbados could have done a partnership and made the first move! It gets back to what level of honour for a prophet where he navel string is buried… Like poor Kamau Brathwaite and his ongoing efforts to save Cow Pastor!

Whoops, nearly did a Free Press there, LOL! Just checked the print edition of the Barbados Advocate this morning, and it seems Education Minister Anthony Wood and Minister of State in the PM’s Office, the Rev Joe Atherley (Emmerton’s Champion & soon due to pass through Strathclyde as soon as the bell has been rung, it’s a rare occasion, so look for it folks) held a joint media gathering to announce the blending of Erdiston and Carrington Primary Schools into the George Lamming Primary as a tribute to his 80 years on this rock!