Digicel Caribbean Cup champions Haiti ensured they went into the CONCACAF Gold Cup in winning form after they defeated St Vincent and the Grenadines in the third placed play off match in the Digicel Shield. 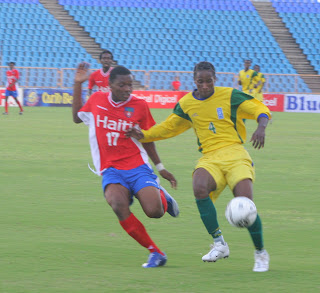 Haiti, taking the opportunity to test some of their squad players, started very strongly and took control of the game from an early stage.

However, with the usual solid defensive organization SVG are now becoming infamous for, it was not until the 33rd minute that Melvin Andrews, who made such an impact in the Digicel Cup in January, was called into action as he made a superb one handed flying save to deny Noncent Windsor whose first time volley from a corner kick seemed destined for the top corner.

This seemed to spark Haiti to life as in the next 5 minutes they peppered the SVG goal with shots from Turlien, Ricardo and Olrish in quick succession all chancing their luck.

It was Alcenat Jesony who finally did break the deadlock when on 38 minutes he controlled Ricardo?s cross on the chest and from 7 yards out simply slotted the ball beyond a helpless Andrews

The second half followed much the same vein as the first and Haiti dominated. With Romulus Turlien in fine form for Haiti in the middle of the park and with Louis Ricardo looking increasingly dangerous up front it was a surprise that we had to wait until the 59th minute for the second goal.

When it did come however it was most definitely worth waiting for.

Turlien fed Ricardo with a superbly weighted defense splitting pass to allow the big striker turn and blast his shot goalward. Andrews proved up to the task however and beat the shot away from danger but when it wasn?t cleared properly Fabrice took the initiative and found Alcenat Jesony with a superb ball.

Jesony showed class of the highest order and scored a goal worthy of the Gold Cup itself when he controlled the ball on the edge of the box, juggled it over the heads of two defenders, watched as the ball dropped and slammed his volley to the net to claim both his, and Haiti?s second goal.

SVG never looked like getting into this game and indeed the game was over as a contest on 67 minutes when big Louis Ricardo deservedly found the net, grabbing Haiti?s third goal, after he was put through one on one by Turlien.

Haiti continued to enjoy total domination but with the result beyond any doubt they used the opportunity to show off their fluid passing ability and despite the fact that it was not an overly competitive fixture the Haitians showed that they present a major obstacle for any side as they head into the CONCACAF Gold Cup. 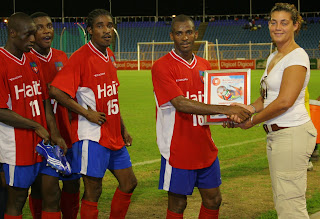 Haiti, having last left Trinidad with the Digicel Cup and gold medals around their necks, had to settle for the bronze medals on this occasion which were presented by Digicel Trinidad?s sponsorship manager Marita Laurent