Virginia Trieloff, Leslie Taylor and Cathy Cummins recently made a presentation of a cheque to The Barbados Poppy League at the Main Guard, The Garrison, St. Michael.

This donation represents ten percent of sales earned at the exhibition held April 11 ? 23 by all four artists at the Main Guard.

Art at the Main Guard? is an artists? cooperative founded by Virginia Trieloff in 2006 to re-introduce herself back into the Bajan art scene and meet and work with members of the art community. Participating artists share the costs of mounting exhibitions held at the Main Guard, The Garrison and donate ten percent of their net sales to The Poppy League.

In 2007, Virginia invited artists Cathy Cummins, Corrie Scott, and Leslie Taylor to exhibit with her at the Main Guard. Roger Chubb of Lancaster House volunteered to curate the 2007 exhibition and has agreed to act as Curator Emeritus on future shows with students interested in the discipline of Critical Curatorial Practice, now a BFA accreditation at degree granting art and design colleges in North America and Britain. 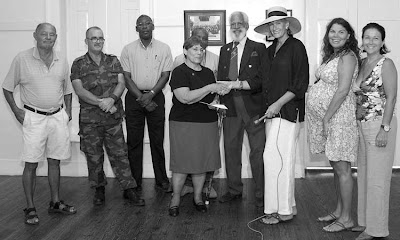 In the background on the left to right (all men) are:

the last two ladies are artists (left to right)