BASSETERRE FOOTBALL STADIUM TO BE COMPLETED IN JULY

St Kitts National Football Stadium at Warner Park will be completed shortly, as the Denzil Douglas regime continues to fulfill its promise to transform the sporting facilities on island which will provide additional developmental avenues for young people and tap into the lucrative benefits of sports tourism.

Acting Director of Sport Dave Connor gave an update on a recent progress report he received from a construction official.

?According to the construction supervisor the playing field is being grassed and should be ready for international play at the end of July,? he revealed. 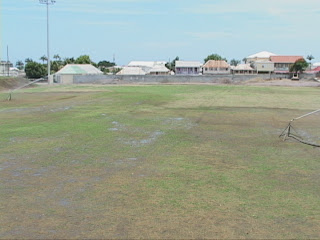 The Ministry of Sport official said he, like many other sporting enthusiasts, is looking forward to the day football returns to the stadium. He explained that the delay in construction was unfortunate but unavoidable as stipulations required control of the Warner Park complex to be temporarily assigned to the International Cricket Council (ICC) during the Cricket World Cup 2007.

Connor referred to the three recently renovated cricket venues and the upcoming construction of the National Athletic Track at Bird Rock that will host the 2008 CARIFTA Games, as excellent developmental tools for athletes and fitness conscious persons.

He appealed for community members to work with his department to ensure that facilities are used in a structured, safe and appropriate manner and not otherwise misused or abused by mischievous elements.