A group of Barbadians have decided to come together and sponsor an unprecedented 4-day long sports festival on Pakuri Arawak Territory in Guyana next month – featuring such events as Archery, Cricket, Canoe-racing and Football – for both males and females in the tribe.

It seems the concept is the brainchild of Damon Corrie – a well known Barbadian of Guyanese Arawak descent who said that he wants to give the Arawak youth something positive to apply their natural talents to; and prepare for annually hereafter. 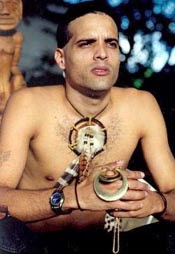 Corrie hopes to widen the scope by next year and turn it into what would be Guyana’s first ‘National Inter-Tribal Games‘ in 2008 – which would be a 9-day long mega-event, and he foresees potential for an eventual Hemisphere-wide or even Global ‘Inter-Tribal Olympics‘ being held in Bolivia in the future.

[NB – Bolivia is the only country in the world with an Indigenous President, government, AND majority of the national population..]

The current July 2007 event will be known officially as the ‘Ernest C. Simon Memorial Sports Festival‘ – in honor of Damon’s sport’s loving Arawak brother-in-law who died in 2001 at the age of 33.

Corrie said that although he put the idea to his relatives in Barbados in a very last-minute fashion – they immediately saw the merit in it and offered to donate prize money and trophies (which are being made by the Barbados firm of Blades & Williams Trophies Ltd.), with relatives abroad also getting involved and even non-relatives who got wind of the idea wanting to participate and making donations.