The Namdo Centre is enshrined in tradition, a whole millennium in fact! 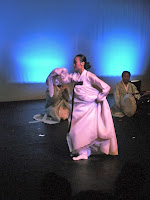 These ladies and gents are extremely gifted and talented performers – individually or collectively, it was a great privilege to have witnessed such commanding performers here in Barbados…

The Centre was packed to the rafters with all kinds of Bajans and visitors alike! A word to the wise though, if there are certain restrictions with photos, then shouldn’t it be listed in the programme and not just an announcement shortly before the anthem – of which I arrived thereafter and knew nothing of? 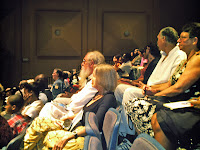 (I guess he felt he had to be a duty-bound citizen and inform, not in the hopes that I am thrown out – just to make sure the right thing is being done; perish forbid just saying to me “Um, pix but no flash didn’t you know“ and a whole lot of aggro would be alleviated) and didn’t understand until Carla Foster made me aware of it with a careful whisper and a follow-up text!

The show unfolded in six segments each demonstrating a type of folk art the group are specialised in… The first segment was pure percussion and not for those who like soft sounds! These guys reminded me of Aerosmith or Mick Jagger and other rock stars of that ilk – just waving their heads to that syncopation! Who says a dutty wine kills? LOL!

This is known as Samullori, it is always with four types of percussion – large and small gongs plus an hourglass-like double drum and a huge tympani like thrummer or even thunderer – the modern-day version of Samullori allows for sitting, the original was standing. 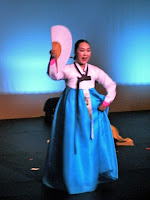 The next part was a pansori or a tale of passion which is sung by the lady as she plays a 12 string instrument very like a zither, she is accompanied by a gent who appears to be the eldest member of the troupe – he plays a larger version of the janggu; the hourglass shaped drum.

There were also two dances – one by a lady in pink and the other from a next lady with a fan. The pink lady was rather sad, and I learned her slow precise movements are to chase away evil spirits! the fan-dance? This is to imitate the petals of a flower!

The group also did the Lambada their way, much to the delight of the audience who tittered when they heard the first refraining notes from the flute or daeguem and recognised the popular party song. 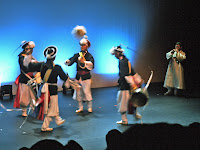 The other movement which enthralled the crowd that night was the Pangut or farmers’ band music originally called Pungmulgut, this involves sangmo – hats with long trailing ribbons like a rythmic gymnast or a blossoming flower. That particular move calls for great dexterity or coordination.

The guys don’t just play the drums, they dance, they shout and somersault – even at the same time! How they do it is beyond me!

I was sorry when their show ended and wished they were here for more days yet! Here in Barbados they had a matinee at 2:30 pm then the evening session I checked out.

They still have Suriname, Grenada and St Vincent – they already passed by Trinidad, Venezuela & Guyana; hope they take some well deserved rest when that rush is through!

I was glad to speak briefly to the dancers before they left, it seems the flash disturbs them as they perform! Also got their autographs too, they were very warm and genuine to me… I was so glad to go to such a rare event!