Barbadian West Coast hotel has answer for next Secret Agent actor ? thanks to Cumbrian scout, eh!

Over the years, speculation has soared the cosmic winds between Hollywood stars as to if any incarnation of James Bond would – GASP – be black?

P-Diddy or Puff Daddy of all ppl wants to lay claim to being the first black Bond, but respect is due elsewhere – as in the new Casino Royale, you’ll recall that Felix Leiter was changed from Hawaii Five-O’s Jack Lord to Afro-American Jeffrey Wright.

However, to my mind, the perfect and first unofficial black James Bond was Wesley Snipes! With or w/o Blade, he’s proved himself a badass in many other flicks such as Passenger 57 or US Marshals – but he was most Bond-like in “Art Of War” –

Shaw is an operative for the United Nations’ covert dirty-tricks squad, using espionage and quasi-ethical tactics to secure peace and cooperation. When a shipping container full of dead Vietnamese refugees turns up on the docks and China’s ambassador is gunned down at a dinner celebrating a new trade agreement with China and the US, Shaw is framed for the murder and must evade the FBI and Triad gangsters to find out what is really going on.

He made serious costume changes, fighting, use of gadgets, etc. What more can a brotha look for? So what the hell does this have to do with Barbados? According to a Cumbrian lass who whiled her time at the West Coast? A lot! This is what she had to say –

Virgil is a master of his art. He creates cocktails for his guests at Cobblers Cove Hotel with the super-speed ease of a hyperactive toddler creating havoc ? his mixing, blending, shaking skills a blur of bottles, juices, ice and hibiscus petals. These finely-honed talents make him a popular and envied man on his island. He enjoys that, fancying himself rightly, as a bit of a star… Hollywood bound, to rattle his shaker and strut his stuff like Tom Cruise.

?I could be the first black Bond,? he boasted over a rum punch in the making. ?The lady over there ? she said so.?

And with a bit of careful tinkering, perhaps he could. It has to be said, he?s a handsome man but in truth, perhaps a heart-flutter or two short of Denzel Washington.

Virgil is instantly recognisable by his twinkly eyes and sauntering swagger. He also sports, rather proudly, two gold front teeth, which apparently add up to impressive status symbol and the ultimate in style statements in Guyana. He doesn?t come from Guyana though. 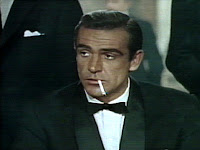 ?Neither does James Bond.?

It seems the way to a Brit gal’s heart is via her liver? Virgil proved to be quite a hit with the uncredited author, she seemed to find something inside her stirring and was quite shaken, so to speak –

I confess I quite like the idea of a budding movie star ? the first black Bond ? with gold teeth and crushed ice, adding a quintessentially Cumbrian ingredient to his extensive and expansive repertoire.

Of my holiday souvenirs, I like that one best. He created a cocktail for me. It was special, he said. A drink with a flip side, eh.

It sure had a heck of a kick.

Vodka, melon liqueur, Triple sec, coconut cream, pineapple juice, something fizzy and an ingredient he insisted on keeping secret, just in case somebody might fiendishly copy his recipe and make a fortune from it before he?d had his chance to become an international superstar.