BARBADOS? culinary team left the island June 16th rearing to go for gold in this year?s Taste of the Caribbean Competition which takes place in Miami next week.

The competition will see the team competing live for gold, in the area of food and beverage against 13 other culinary teams from Anguilla, Bahamas, Bonaire, British Virgin Islands, Cura?ao, Grenada, Puerto Rico, St. Martin/St. Maarten, St. Vincent and the Grenadines, Suriname, Trinidad & Tobago and the United States Virgin Islands.

This year all teams will compete simultaneously, preparing their own unique Caribbean menus based on a mystery box of ingredients and the competition will culminate with one grand dinner extravaganza at the Hyatt Regency hotel, featuring all 13 three-course menus.

Part of the team?s preparation for the 2007 Taste of the Caribbean Competition included training which encouraged them to create internationally styled dishes with a unique Caribbean flavour and the recently concluded Gourmet Evening Series, which gave Bajans a chance to critique their dishes. 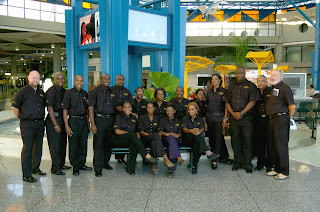 The Barbados Culinary Team at the Grantley Adams International Airport on their way to the 2007 Taste of the Caribbean Competition in Miami.