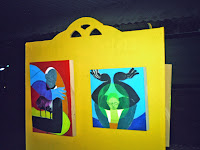 When last we visited at Limelight Cafe, there was a Grand Launch for select folk about David Kirton‘s new album – that review is still to come, but let’s get a closer look at the artist who was busy painting behind David as he sang his heart to the audience that night… 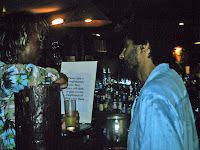 William Attaway was born in the USA, but left at a tender age for the shores of Barbados where his mother and father as well as his grandmother influenced him into the world of art. Seeing him flurry away at the canvas that night, for some reason reminded me of Jackson Pollock‘s style of splashing but William had his own variation – splash water over the canvas, then dash colour on it so the paint streaks along the tableau…

Surrounded by natural mountain kilns, the ocean and its inhabitants, Attaway developed a passion for the environment that would later be captured as his signature style. 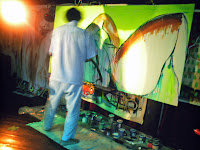 After the sample of David Kirton‘s new album, we asked William if his new work was juxtaposed between “Sugar” & “Green Camouflage“?

A career artist in public and private sectors, Attaway?s work stands colorful and tall in Venice and surrounding Los Angeles neighborhoods. An active member in his community, Attaway continually works with local, national and youth organizations teaching the importance of progression through art, education and peace.

He responded in the affirmative, so then we asked if Picasso and Pollock were his main influences – which he countered by clarifying his mother (Fran) is his main influence as well as Picasso and Michel Basquiat (This is a Haitian who was discovered by Andy Warhol) and he also lists nature itself as influencing his work.

Over his career he has worked with city planners, politicians, corporations, youth and community groups. He has also been very active in the restoration of the arts in Los Angeles public schools. 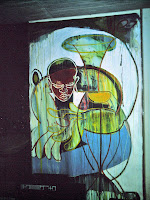 William is definitely not a starving artist! Jamie Foxx, India Arie, Qubilah Shabazz (Malcolm X‘ daughter), The Rock of wrestling fame, the late Robert Foxworth (Questor Tapes & Falcon Crest) as well as the late Dudley Moore (Arthur with Sir John Gielgud) among many others who snap up his works with the avidness of any stamp or coin collector! So be sure to take a gander at his site and I am sure you will spend a good while there appreciating his ethereally aesthetic elegance and excellence!