Damon Corrie’s Log – 23407; Bolivia’s Presidential Palace in La Paz, where their President – Evo Morales Ayma – signed into law the Nationalisation of the Oil and Gas Industry of Bolivia; one of the largest reserves in the world. On hand as invited guests to witness the historic event were the Ministers of the Bolivian Government, the top brass of the Bolivian Armed Forces, members of the Indigenous Caucus of the Organisation of American States, and several hundred citizens of Bolivia.

President Morales is the first Indigenous Amerindian Head of State in the Americas in almost five centuries of European colonisation and domination of the Western Hemisphere, and he gave a spontaneous & moving speech – interrupted regularly by wild applause – explaining the reasons for his move and the truly criminal discrepancy that previously existed between what “the powerful multinational leeches were extracting out of the country as compared to the pittance they were paying the Bolivian people – 85% of whom still live in poverty due to such unbridled capitalism“. 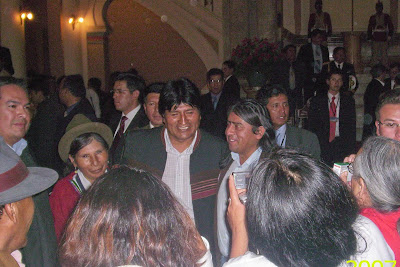 Afterwards, the President personally greeted all the members of the Caucus and we were availed the opportunity to have our photos taken with him. Every country in Latin America was represented in the audience and the Indigenous Caucus, the Hereditary Chief of the Eagle Clan Lokono Arawaks (Damon Corrie) was the only Caribbean person present at this historic event – as a Barbados born person of Guyanese Arawak descent it was a great honour for him to be in the ancient ancestral birthplace of his people, to stand in solidarity with Amerindian brothers and sisters, and witness their President in action.

40 years after the great revolutionary fighter Ernesto Che Guevara was murdered by the American Central Intelligence Agency in Bolivia trying to liberate the oppressed Indian masses, the Indian Peoples of Bolivia finally have a government of their own that is delivering equality, justice and true freedom to the long suffering Indian majority of this beautiful country.