Q: Which Barbadian pub has its best night on a Tuesday and Why? Read answer below… 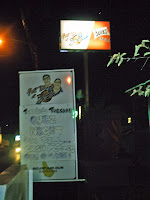 When you go to Worthing in Christ Church, the main part of Barbados’ southern coastline, the place to be on a weeknight is Players at 8:00 pm on a Tuesday

(named after the Norse God Of War, may come in handy, ppl)!

The pub quiz has quickly become the thing to be seen or doing that evening in question (pun intended)… It is not merely General Knowledge, there is a large chunk of sports-related inquiries from a Brit perspective – but the killer is the photo sessions! There are two picture rounds and the photos get distorted (in this article I have put some for you to try – answers at end of this story, no peeping!)…

What kind of questions do you get? Let’s see – 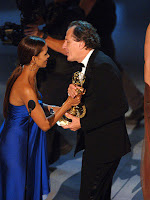 Many of these questions have stumped the best, including yours truly, since I usually sit inside, sometimes the group I work with wonder what the folks outside are doing – 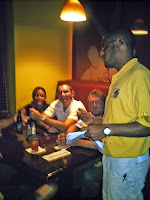 I think they should be wanded for PDA‘s, LOL!

Between rounds apart from guzzling beer, rum & coke or Angostura’s LLB: Lemon/Lime’n’Bitters, you can either try their fishcakes which are huge! The Dijon dip is best… Or you can try the Fish Goujons which are fish sticks with a blue cheese dip! 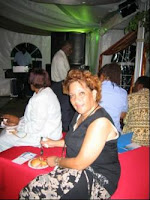 Hard to believe, huh? I have scoured the internet not to be outdone, LMAO! Get the pictures yet? Let’s see, one point for each correctly identified personality – 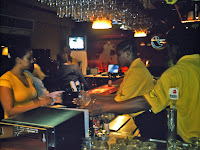 So if you can withstand this then you may have a chance Tuesday night at 8:00 pm at the Players Sports Bar in Worthing! Believe it or not they get more folks in there on Pub Quiz nite than they do on a Friday! Please note there’s a small fee to reserve a table which is usually split between team members – no more than eight to a table.