“….Barbadian investors who have invested thirty-five million dollars in Belizean agriculture and it is to the mutual benefit of the two countries that the rest of the region should support the growth and the full achievement of the objectives of the Centre for Climate Change….” 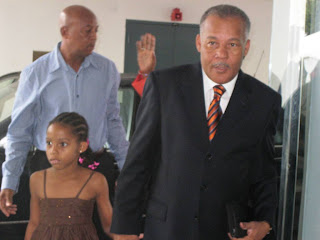 With these words Owen Arthur, the Prime Minister of Barbados, cemented a pact with Central American neighbour Belize. This is a very recent item off of Channel Five out from Belmopan City. There is nothing wrong with the deal in and of itself, but there will be some Barbadians who wish that the funds were used to keep this island’s sugar industry dropping down to one factory.

There are other Bajans in the quandary of whether to use land that’s left here for either agriculture or housing – in my view, and sooner not later… and in all seriousness – will Barbados not have to consider two other options? One is to manufacture islands or dependencies to support not what is necessarily a growing population but Barbadians of a particular number who each want their own territory. Another possibility is to use Culpepper Island at the vexation of the Indigenous Peoples of the Caribbean…

On this the 12th day of March 2006, we the descendants of the first peoples who discovered and inhabited all of the islands of what is now known as the ?Caribbean?,

Do hereby declare to the world that rumors of our extinction are greatly exaggerated and we are in fact still very much alive and among you ? the inhabitants of our islands who came after we were robbed of our birthright in the name of ?civilization? and ?progress?.

Second, we collectively condemn the fact that the Karifuna-Carib inhabitants of the islands now known as St. Vincent and Trinidad ? still have no territory to call their own after five centuries of being discriminated against and marginalized in their own lands!

We call on the Governments of St. Vincent and Trinidad to shed the cloak of neo-colonialism and recognize a part of the occupied lands they inherited from the European invaders ? as Karifuna-Carib Territories.

Third, we collectively condemn the fact that although the Karifuna-Carib nation of the island now known as Dominica is approximately 5% of that countries total population ? they are forced to accept a grossly inadequate five square mile territory and the illegal presence of a foreign (non-Karifuna-Carib) police presence on their officially recognised territory ? in violation of International Indigenous Rights Laws.

We call on the Government of Dominica to do what is right, just and fair ? and increase the ?Carib Territory? to atleast 15 square miles, for this would be commensurate with the percentage of the Karifuna-Caribs within the total population of this country; and remove the Police presence from ON the ?Carib? Territory ? to OFF the ?Carib? Territory on government lands.

Fourth, we the descendants of Princess Marian ? daughter of the last Hereditary Lokono-Arawak Chief Amorotahe Haubariria (Flying Harpy Eagle) of the Eagle Clan Lokono-Arawaks resident on this island now known as Barbados, and the Karifuna-Carib ambassadors from the island now known as Dominica ? do hereby jointly re-claim from the Government of Barbados – the small uninhabited island outcrop known to locals as Culpepper Island.

This in turn then is a series of negotiations that may or may not be required with Native Amerindians if Barbados chooses to exercise the Culpepper option for housing/farming needs, meanwhile, what is the Belizean leader‘s view on all of the flurry of Barbadian activity? This is part of Sa’id Musa’s comment – 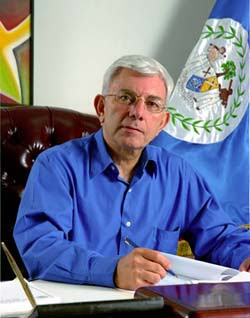 “ …. we agreed that natural disasters and climate change present a grave danger to our countries and we agreed on the need for closer cooperation …. we had an in depth discussion on the question of energy; the cost of energy is having a serious effect on our economies. We therefore analyzed the situation and discussed practical ways to address this issue including perusing renewable energy alternatives.“

This means that he is not about to turn away funds that can benefit his country’s coffers, as Belize is on a lesser developed index than Barbados is considered to be – but what about Barbados for Barbadians – where are the benefits for us in this ploughing of dollars into Belize? Unfortunately the Channel Five article did not say!