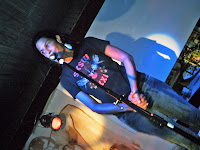 Back in March, both Noelle Attaway-Kirton & hubby Dave went to the Lone Star state, after having visited the 21st edition of the American entertainment trade showcase known as “South By Southwest” in Texas, Bird’s Eye Music is taking its stable of performers seriously and itself – this earned much respect from a prominent member of the Barbadian music fraternity’s organisers at the Limelight Cafe in Bridgetown. 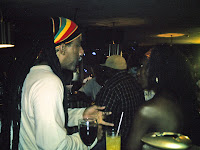 There is a public launch for David’s new album “Time For Change” at the Limelight tonight, earlier this week there was a private launch for industry officials and fellow performers where Phil Phillips, former manager of Krosfyah, had serious advice for the Limelight crowd…

He said a Business Plan is critical for tabulating the success of a band or an individual as it allows those who may be investing or lending funds to get a good grasp on what the next step is for that musical entity, and thus be able to place financial support appropriately. 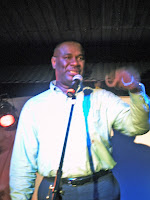 Mr Phillips went on to mention that Crop Over has thousands of songs generate any given year, but few – if any – artistes think of a Business Plan. He said if musicians are serious about their product then they have to treat themselves seriously, not that you never laugh or smile but approach their intellectual property with full professionalism.

Whether it is a Caribbean performer or Rihanna with huge success, either one reached where they did not solely by talent but funding and organising both talent and funds thru such a Plan!

Phil also credited Bird’s Eye Music for taking time to research groundwork for checking shows like SXSW XXI or Midem and other popular industry network gatherings – it requires follow-up before, during and after!

In closing, Phil Phillips urged entertainers to stop limiting their music to “Crop Over Music” as this gives them only six weeks of the year if they’re lucky, when you have a broader-based category then you gain more airplay and more attention. 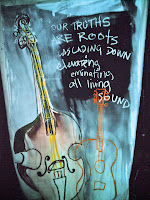 Then the man of the moment came forward, David Kirton unleashed the title track from his latest disc “Time For Change” where his harmonics have never sounded better, he is truly coming into his own now as a Bajan/Caribbean proponent of a growing artform.

“Free To Fly” is a soaring and lilting trip, the carefree aspect is very well-conveyed for the audience! “Sugar” is his appreciation of the Caribbean woman, which was also shown in William Attaway‘s artwork (a study of William‘s clients and his styles and influences is geared for another installment) that was created while David sang! 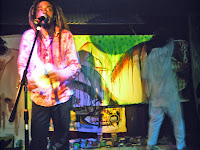 The painting transformed during the encore, which got “Green Camouflage” played for the audience – the painting took on the melded vivid aspects of both “Sugar” & “….Camouflage“, which William confirmed afterwards! If you like what you’re reading then head on over to Limelight tonight from 10:00 pm for the Public Launch of “Time To Change“