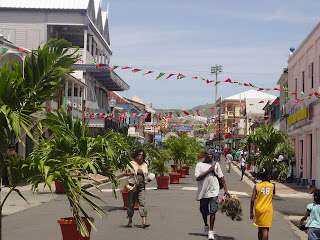 Since Mid-January, the Bajan Reporter has been following an inquiry in Basseterre which was deciding if cops there were really ill or vex that no raise was forthcoming during Kittitian Independence Celebrations in September 2006 – the main reason such a probe was of interest was the fact this interrogation was led by a Bajan, Charles Blades!

Now, St Kitts’ main Opposition – the People’s Action Movement (PAM) wants to know what is the delay in revealing the findings, now that deliberations have been concluded since January, according to the Sun St Kitts… PAM’s leader, Lindsay Grant, wants to know what good is it to hold an inquiry into a matter and then withhold all that was discovered –

?It makes no sense having an inquiry, getting a report and then keeping it. It must be brought to the fore and whatever problems that came out of the report, then the government has to determine whether or not they can address those problems.

?We?re calling on the government to release this report to the public so that the public can determine whether or not the inquiry served a useful purpose,? Grant said.

It is believed that the inquiry highlighted a number of grievances that police officers have been expressing for some time.

The federal government ordered the inquiry, because according to Attorney-General Dennis Merchant the move taken by the police officers affected the opening of the new law year, the Independence Day Parade in both St. Kitts and Nevis, as well as the general effectiveness of the running of the police force.

The government believed that the sick out also threatened the security of the country.

It seems that Sun St Kitts has so far been unable to get the attention of Basseterre’s Attorney General to ascertain the delay in presenting the findings of this probe. Years ago, a flurry of sick-leave happened with cops in Barbados for eerily familiar reasons to this case! However, no probe was held in Barbados for that situation…