Well it seems IMDb and yours truly are at variance again, this time it’s between Shrek 3 and Pirates Of The Caribbean 3: At World’s End – in Shrek 3, I remarked that the main character does not want to accept the consequences of unprotected sex as in becoming a father;

for POTC3: At World’s End I said Keira Knightley leaves me cold and she should do like the rest of Hollywood and buy some boobs!

I even ticked the box in both reviews to warn if there’s a spoiler too, as always!! Well, my take on “Shrek The Third” has been deep-sixed and the one for POTC3 is still on hold despite a fourth revision…. Here’s the latest draft in case IMDb aces this too (IMDb has to remember there’s Wikipedia, Rotten Tomatoes and other similar fora, so they better watch their snootiness) –

Loved it, it was faster paced than its two predecessors… The amount of cut-throatedness against each other was amazing – I was wondering how it could be resolved in the 168 minutes allotted it!

Johnny Depp as a schizophrenic was very intriguing, all of that rum finally left a warped delirium tremens indeed, yet he was very cunning right to the end in spite of his befuddlement when in solitary purgatory.

Keith Richards appearing as Depp‘s father after being promised ever since was a bit anti-climactic, but welcome nevertheless! This film portrayed Orlando Bloom in his most macho, masculine, butch and male role ever yet! Now I can understand why wmn would drool over his sorry skinny butt! It was unexpected that Disney allowed his rather strong character to be murdered, albeit survive as the next Davy Jones…

Keira Knightley as a sex symbol I find difficult to believe for myself, I think she needs to be like the rest of Hollywood and get the breast, uh, best implants that royalties can buy – but she was very good as evolving into what was more pirate than even Chow Yun Fat‘s Singapore Captain! I hope there can be a prequel expanding Chow Yun Fat‘s character, it was too brief in this film to have any significant dimension. 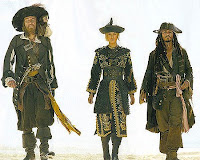 The strained love affair between her character and Will Turner resembled that of the Greek myth between Orpheus and Eurydice. Many chunks of this flick were done in the Bahamas and also filmed at the same time as POTC2: Dead Man’s Chest to avoid any continuity challenges. BTW: Quick clue, watch all of the movie even past the credits – there’s an extra ending for you!

However, although they say there are no more POTC’s, there are still unanswered questions – what happened to Sparrow’s quest for Ponce de Leon’s Agua De Vida? Will Barbossa stop Jack from reaching Florida? Were Calypso and Bill Nighy‘s un-squidded human sailor be reunited in pure passion? What about the Black Pearl, who does it really belong to – Barbossa, Sparrow or …. someone else?