Since Tuesday, Earthrace encountered several storms as she made her way across the Mediterranean Sea from Port Said, Egypt to Malaga, Spain, a distance of 1950 nautical miles. 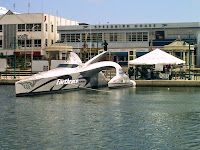 These storms stalled Earthrace?s speed from 22 knots to 10 knots as they battled head seas of 15 feet and 50 knot wind gusts.

On May 26th, Earthrace had a successful transit through the Suez Canal; with the help of the New Zealand Embassy in Cairo and the Chairman of the Suez Canal Authority, Admiral Ahmed Fadel. Earthrace was granted a special transit through the canal allowing her to travel at top speed. After the transit, the Earthrace team was presented with commemorative silver medals from a representative of Admiral Fadel to acknowledge her unique and speedy passage.

The skipper of Earthrace, Pete Bethune, 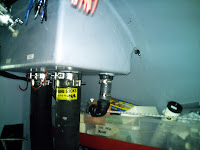 said ?Being granted permission to travel through the canal at top speed was a real honor and a thrilling experience. In fact this would have to be my own personal highlight of the race so far. And the Egyptian Authorities were just brilliant.?

The Earthrace boat is attempting to break the world record for a powerboat to circumnavigate the globe, and is doing this using biodiesel fuel ? a renewable fuel sourced from vegetable oils.

Earthrace began the record attempt on April 7, 2007 from San Diego, California and must finish back in San Diego on or before 21 June to break the record of 75 days 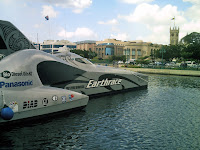 Earthrace is expected in Malaga, Spain for refueling on the morning of Wednesday 30 June 2007. From Malaga in Spain, Earthrace will navigate to Tenerife in the Canary Islands to refuel before heading across the Atlantic to Barbados, a distance of approx 2800 nautical miles – the longest leg of the race.