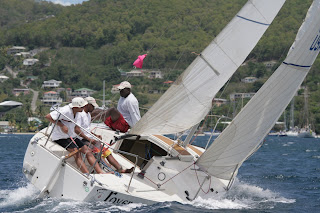 As far as the record shows, this was Dominica?s first representation and introduction to a competitive sailing event. We were proud to be the first as this will not be the last in our efforts to promote Dominica sailing.

The first race saw the boats race out of Port Elizabeth and under the island of Bequia, up about 1/3rd of the Eastern Coast and back under the island and upwind into the harbour and to the finish.

On Saturday there were three Olympic-like windward-leeward races in the open harbour.

Sunday was a lay day with lots of shore-based fun activities, and then two further harbour windward-leeward races were held on Easter Monday, for a total of six races. 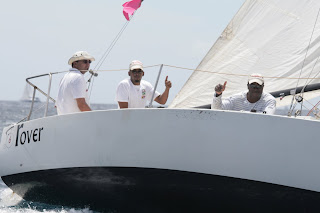 The DYC team was mostly a training effort and did not sail with spinnakers, but started and finished all races, ending as high as 5th and placed 6th overall.

All team members declared the entire weekend experience a great success not only for themselves but also for the DYC and for Dominica in general.

?So many people were very happy and impressed to see the big huge Dominica flag flying on the Mothership and to see a Dominica Yacht Club entry into regional racing? says Anthony Gunn.

?This first participation into regional sailing is a great first step for the DYC and for Dominica? adds Hubert J Winston.

?We had a ball and were well received by everyone? confirmed Val Victor and Allan Daisley, rounding out the DYC team. 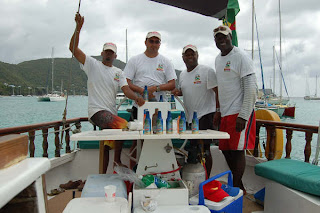 The DYC has also entered the BMW J24 Invitational Regatta in St. Lucia in May, and are looking at plans to continue racing the Dominica flag around the region over the coming years.