{Ed’s. Note; I officially started part of my vacation yesterday, had a seminar then and another today – so work overrode for a while… Hope to have things in swing before week is over!}

This item came from the Food and Agriculture Organization of the United Nations (FAO) as part of a drive to boost awareness on regional agriculture, particularly the potential for small and medium companies in agro-business. If what you are about to glance through seems very fascinating, then you can give Dr. L. Barbara Graham, FAO Sub-Regional Representative for the Caribbean a holler at either barbara.graham@fao.org or call (246) 426-7110…

There is hardly anything growing on a coconut tree that does not have some use, making the total economic potential of the plant worldwide an immense figure. The tree is a source of food, wood for building materials and crafts, and raw material for clothing and numerous industrial products.

Coconut as food has a long tradition in the Caribbean. It goes into serious things like coo-coo, rice and peas, soups, sauces, bread and cakes; and frivolous things like turnovers, sugar cakes, ice-cream, sweets. Alternatively, we could classify the many food items containing coconut according to whether they are based on coconut milk and fresh coconut or on desiccated coconut since the production of these ingredient bases requires different processing operations leading to additional value added opportunities in coconut production. 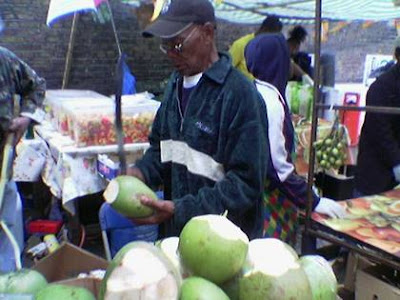 Nata de coco (Sp.: cream of coconut) is a white to creamy yellow jelly-like substance consumed as a dessert and considered a health food because it contains no cholesterol and is high in natural dietary fibre. Nata de coco is obtained, using technology originating in the Philippines, by reducing coconut water to a high concentration of sugar before adding vinegar and a starter culture and pouring the mixture into a mould for fermentation. There then follows a labour intensive process of repeated boiling and rinsing of the product to remove the acidity before serving.

Many of the confectionery items produced and consumed in the Caribbean are of variable quality, shelf-life and consistency. The Food and Agriculture Organization of the United Nations (FAO) has provided technical assistance in the region on appropriate processing technologies, proper processing techniques, appropriate quality control, quality assurance and good hygienic practices during processing, as well as packaging and labeling to guide small processors in improving the overall quality and shelf-life of their products. A technical guide on the subject is to be published shortly.

The demand for edible coconut oil, traditionally produced through chemical refining, has been restricted by concerns about cholesterol levels. Studies of coconut-consuming populations have however shown that dietary coconut oil does not lead to high serum cholesterol or to high coronary heart disease. Research has also been allaying fears by showing that, unique among vegetable oils, virgin cold pressed coconut oil is high in the medium chain fatty acids (MCFAs) that are readily digested. The major fatty acid in coconut, lauric acid, has antiviral and antibacterial functions. Lauric acid occurs in human breast milk and protects the intestines of babies from bacterial, viral and fungal infection until the immune system can fend for itself.

Interest in ?designer? forms of coconut oil has increased. Of several methods of extracting virgin coconut oil (VCO), the least destructive methods rely on first grating and mixing the fresh coconut with water to produce coconut milk then using centrifugal separation of the oil from the mixture. The oil is then heated to temperatures not exceeding 600 C to drive off the last of the moisture. VCO, which fetches much higher market prices than the traditional chemically refined coconut oil, is used primarily in pharmaceutical and cosmetic applications but is finding its way into organic food stores. 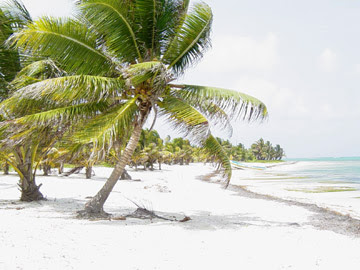 Coconut flour and coconut vinegar can both be produced from by-products of other processes ? flour from the residue obtained after cold extraction of the oil, while vinegar is the fermented product of coconut water that is often discarded in copra production. Coconut flour is high in fibre and low in fat and imparts a pleasant coconut flavour. It contains no gluten, the component in wheat flour that provides gas retaining properties, and so cannot completely replace wheat flour in products like bread that call for volume expansion. It can, however, complement wheat flour in baked, fried and steamed products at levels ranging between 15 and 25 percent, depending on the type of product.

Coconut vinegar is produced by adding yeast and sugar to coconut water and allowing fermentation to occur. The resulting alcohol is then oxidized to vinegar. The end product is low in acidity with a unique coconut flavour and is a common ingredient in cooking and pickling.

There is still a large demand for chemically refined coconut oils, primarily in soap making. In the Caribbean, Dominica has been one of the notable success stories in the region. More recently cocodiesel or coconut methyl ester, a diesel fuel substitute derived from chemically refined coconut oil, has found a place in the growing biofuel market. Automobiles can run on coco-diesel without modifying or changing their diesel engines. Unmodified diesel engines could switch to a 10-20 percent coco-diesel blend as an alternative fuel and experience no loss of power and performance. Use of a one percent blend of coco-diesel increases mileage by 10 percent in cars, reducing harmful emissions from diesel engines.

Coconut husk is the source of several widely used products. The fiber, or coir, relatively water-proof and resistant to salt water, is obtained by soaking the husks and separating by hand or machine. The fibres – long bristle fibres or short mattress fibres ? are used in a series of products including brushes, mats, mattresses, floor tiles, sacking, rope and twine, automobile upholstery, fibreboard and packaging and insulation.

A promising new use of coconut-based material is shown by an order from the Government of China placed with the Philippines for geotextile derived from coconut husk. Geotextiles are used in construction projects to prevent land slippage while allowing the movement of water. These are very widely used in the Philippines along roads and highways to prevent erosion.

Even nata de coco, the Filipino dessert, has its industrial use. Its non-food applications include use as a bacterial medium and in capsule shells for pharmaceutical products; as an additive for high grade paper manufacturing, in fiber glass and filter sheet production; and in the manufacture of acoustic diaphragms for audio products, in cloth, computer chips, packaging and candles.

Coconut husks also have agricultural uses. Horticulturalists use coir compressed into briquettes for pot plants as an environmentally friendly renewable resource free from parasites and harmful bacteria. Orchid growers use the raw husks as rooting platforms. The coir dust that remains after the extraction of fibre can be used as mulch, as a hydroponic growth medium or introduced into the soil to help retain moisture. Coir briquettes and coconut shells are both used as fuels in India.

Coconut shell is used for craft items including jewelry, presentation boxes, ladles, buttons, and fruit and ash trays. Another important use is as activated carbon, produced by heating chunks of the shell at high temperatures without oxygen then treating the charcoal with oxygen to open up the tiny pores between carbon atoms. This activated charcoal is able to absorb large amounts of impurities from gases and liquids and is used to make filters for gas masks. Coconut is the raw material of choice here because of the high ratio of energy to unit mass produced by burning coconut shell compared to other materials. This property could also be exploited at the local level for cooking purposes by using coconut shell in charcoal production and so reducing loss of forests and the resulting erosion of soils.

The trunk of the coconut tree produces palmwood, a durable and renewable substitute for endangered hardwoods, used for furniture, carvings and as construction materials. Coconut trunks have been put to diverse uses including canoes, drums and containers.

Even leftover coir dust and short fibers can be pressed into a board that is termite-proof because of the presence of creosote. Paper pulp can be made from coconut trunks, branches and leaf stems. 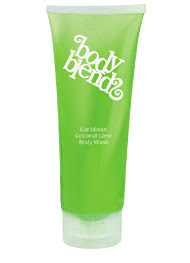 An expanded coconut industry will require more trees, providing opportunity for the development of nurseries. Coconuts thrive in sandy soils, especially near the coast where they help with coastal conservation, and prefer abundant sunlight and regular rainfall. They need high humidity, doing well in dry climates only with frequent irrigation and shade in very hot weather. Regular digging of the soil between the trees and organic mulching help conserve moisture in the soil. Coconut by-products such as coir dust, coconut husks and dried leaves make good mulching material. Organic manure will improve soil structure, soil texture and nutrient levels and increased organic soil content helps retain water in sandy soils and loosen the structure of clay soils, making them more porous and improving drainage.

A number of diseases of coconut trees are found in the region. Lethal yellowing invaded the Caribbean in the 70’s and is still prevalent. Red ring disease, a wilt disease, has also attacked coconuts in the region. Most recently, the red palm mite has started to damage trees in Dominica, Martinique, St. Lucia and Trinidad. Intense research efforts are going on across the region to prevent devastation of the trees.

Lethal yellowing is probably the most devastating disease in this region. Infected trees eventually die with the entire head of the tree being lost so that a ?lamppost? condition remains. Large areas of such headless tress are seen in Jamaica, for example. The Food and Agriculture Organization of the United Nations (FAO) has been assisting the region with managing this condition and has been a partner with several other agencies in a major regional project funded by the Common Fund for Commodities. More recently, with the introduction of lethal yellowing in St Kitts and Nevis, FAO is again moving to provide technical assistance for the management of this disease.