Recently there was a preview for the Air Jamaica/C’bean Fashion Week to be held in Jamaica from the 6th to the 10th of June, the early edition was performed near one of the pools at the Almond Beach Village in St Peter. 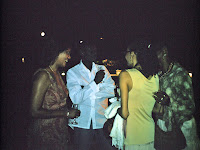 The show was slated to start at 7:30 pm, got there for 8:00 pm and feared the worst, but it was okay – they did not actually get underway until 9:00 pm! The organisers were waiting for a Govt official who never showed up! 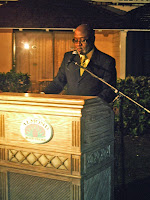 Late as it was, they insisted on all of the key movers for the event giving some kind of a comment before the fashions were revealed… Kingsley Cooper from Pulse Investments was the main speaker who had much to disclose the tight gathering… He explained it’s been seven years for the Caribbean Fashion Week; this year is not just a show – this is a charity benefit too! Fashion For Food acknowledges an African presence which creates a better chance for marketing Caribbean designers. 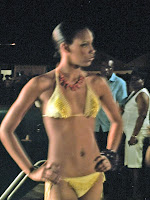 Mr Cooper also was grateful for the assistance of the Almond Beach Village and Air Jamaica in making the preview so possible. He wants for all Caribbean ppl to see Fashion as another plank of industry to rely on in addition to Tourism. Now for the taste of this show in Jamaica, first of all, those models all need to be taught how to catwalk even if there is no real path for them to tread!

There was also Caroline, a Barbadian model who I am convinced that due to the fact she was among Jamaicans she felt she had to be a hot stepper – LITERALLY! This gal did not march or strut, she GOOSE-STEPPED to the music for displaying her threads! Girl, back to the drawing-board!

They whizzed up to one end by the pool and then swish back to the room for changing before any photographer had a true chance to get a good picture – this applied to both Advocate & Nation, if you see the print editions? Only the Advocate had a single fashion clip, the Nation had only a shot of Kingsley Cooper. 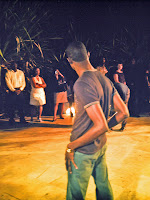 The best local fashions came from Rojo and Wayne Smith – Rojo’s was mainly men’s wear and Wayne Smith had a few stylish cocktail dresses, then they had other stuff that was really to die for …. no pleasant death either! Ppl who look as though they’re trying to dress like a Caribbean Darth Vader among other travesties! 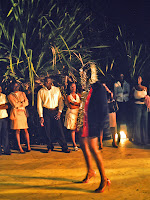