Late last month, a three man delegation from the indigenous Peoples Caucus of the Organisation of American States Working Group to prepare a draft declaration on the Rights of the Indigenous Peoples of the Americas, meeting for the 10th session in the capital city of La Paz Bolivia (April 23rd – 27th 2007); were taken by Chauffeur to the Presidential Palace to present sacred gifts for President Evo Morales Ayma.

Hereditary Chief Damon Gerard Corrie of Barbados, gave a woodsculpture of a Paramount Chief created by master woodsculptor Foster Owen Simon of Pakuri Arawak Territory in Guyana – on behalf of the Taino-Arawak and Kalinago-Carib People of the Caribbean and the Lokono-Arawak People of South America, and Ronald Lameman of Canada, gave a soap-stone carving of a Thunderbird created by a master stonesculptor of the Cree Nation of Canada on behalf of the Confederacy of Treaty Six First Nations of Canada. 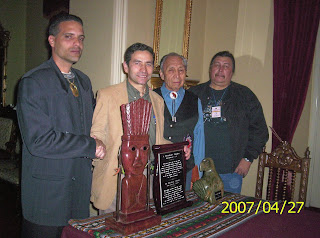 Elder Stuart Jamieson of the powerful Six Nations Iroquois Confederacy of North America offered an important and sacred prayer to bless the occasion.

President Morales Ayma – who is the first Native American in the Western Hemisphere to have democratically attained this high office in the entire post-contact history of the Americas.

The gifts represented the status of Ayma’s strength and fortitude in creating the first Internationally recognised and truly Native Government in over five centuries of European Colonial – and subsequent Neo-Colonial occupation of the ‘New World.‘

It is also for the spiritual blessings directed from the hearts of all those who are truly loyal to their Indigenous identities – to the new, free and just Bolivia President Morales and the Native Ministers of this peaceful revolution have created; which is a light of hope to all Indigenous Peoples the world over.

A direct hand-over to President Evo Morales Ayma was scheduled – but at the last minute an emergency meeting with Government officials concerning a natural disaster which occurred that day was called at the Presidential Palace just prior to the President’s imminent departure that same night to Caracas, Venezuela; and it pre-empted the schedule of planned events. Bolivia’s Ambassador to the Organisation of American States – His Excellency Reynaldo Cuadros, who had worked tirelessly on behalf of the entire Indigenous Caucus of the working group throughout their stay in Bolivia availed himself to receive the gifts on behalf of the President in lieu of the turn of events; and immediately after the presentation the gifts were taken into the emergency meeting to President Morales Ayma.