I was late getting to Sheraton this Friday night gone, but I need not have worried! The triple-threat at the Olympus for the BFF didn’t materialise ’til about 8:35 pm – Then we were hit with Laura Lin Hutchinson’s project “Holding On” which received a grant of 25-thousand from the NCF’s Cultural Action Fund – the same grant which recently assisted ArtsEtc with “Shouts From The Outfield“… 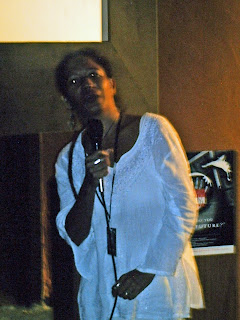 Written and produced by Ms Hutchinson, “Holding On” is a tale of 3 sisters debating over the sale of their family house; Varia Williams in this film was a bit of a clockworked homebody and is the girl in the middle whereas her sister as played by Rosemary Phillips is a Brit-transplant version of Rihanna, but she’s the baby of the lot – their third sister (Marina Smith) is the eldest and is a gold-digger of elder males and who’s every other word is “F@#%ING” this, that and the next!

While my verbal adjectives from moment to moment can be far from Vatican purity, nevertheless, is cinema not a form of escape? I know part of the reason I go to a theatre is to get away from all the cussing – family, friends, work and so fifth… Last place I really need to be reminded, perhaps as it is a local production it stands out more – yet I will site Sean Russell’s Kite Flyer had bad lingo, but not every ten seconds!

Sean M Field was intriguing as the UK shutterbug who seems to have a thing for Varia’s character – his accent seemed convincing and his amiability and straightforwardness while in this role was readily apparent.

I nevertheless did not see the need for extreme close-ups on faces at all times when there was nothing for the given character to express at any moment, but this directorial tic will hopefully fade out as experience becomes the best ally.

For me, the fact the short feature was to be continued was not properly expressed – it seemed to have an abrupt ending, which instead could have had a few loose ends tied …. but enough left hanging for the viewer to realise that the story will move on at a later point.

Although No Budget Productions’ “Villains Anonymous” was the shortest piece and came in the middle I am reserving that for last as I need to take big deep breath and deal with – the final truth?

Ian Walcott as an actor was not convincing – he seemed to be reciting words for the film to be done in a hurry, his love scenes with Varia were absolutely boring! I see more passion in a cockroach trying to run for its life from either insecticide or a young cat looking for new prey. It also seemed while kissing her Ian looked as though he’d have a better time slurping spaghetti sauce stains off of his dashiki that he wore to make ppl believe he was a young boy at UWI…

The wig to make him appear youthful was like a dyed Brillo pad deciding when to make a getaway from his scalp, and the method of his using a headtie to hold the wig while in bed with Varia was ridiculous! As for him sucking her toe – I am no prude and have done crazy things too, but was it really conducive to the flow of the story? It was better when it was implied he was taking off her panties in that same scene! Poor editing in my view!!

Walcott’s attitude as a politician was far more convincing – especially in the end while Varia as his wife lay dying in hospital, it mattered more to be ready to be sworn in as PM than to be there for her as she lay dying. The make up for the movie was fantastic – way to go Adzil Stuart, Patrick Foster really looked ghastly when his Professor Bernstein character was dying; the make-up was also well applied to make Varia look two toes from the graveyard! 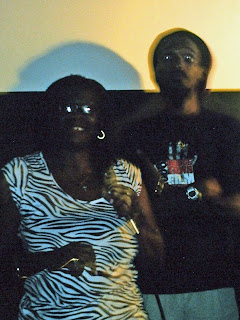 Editing was a major bugbear with this film – not only in footage but dialogue and copy… Are two gay lovers really going to debate AIDS statistics from 1984 to now? Is a gay lover really going to insist that his man use a condom to screw his wife? How real is that?

Cicely Spencer-Cross was not an actress this time but the Producer – Bajan Reporter asked how is that when Geni (Dawn Lisa was the materialistic best friend of Varia’s character) pledged to show a tape from the now dead wife of the just sworn-in Prime Minister, that a fleet of Task Force men not just ransack her house and slam her in jail for sedition as has happened in many Caribbean isles?

She told the audience if she and her hubby – Thom Cross – have their way, that the film is a pilot for a TV series, to show if the tape was played and what part did HIV or AIDS play in shaping the lives of the twin children left behind in all that confusion… It seems they were only able to access 50-thousand US to get the film made.

Now for Neil Sorhaindo – if there is anyone who deserves an award tomorrow night it is No Budget Productions for their hilarious “Villains Anonymous” which is a take off on all bad guys everywhere! Antagonist Burrows is a new villain in a long family tree of baddies, but he just hasn’t hit on the right catastrophe to lay credit to… 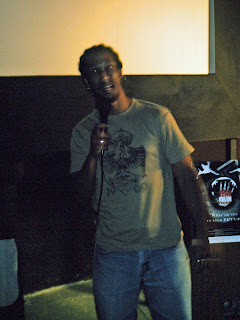 He seeks a counselling group, the title of the feature, and also orders a Master-Plan kit from 1-900-BEE-EVIL, with a very convincing slick hawker played by Crucial Productions’ Phil Archer – I laughed out real hard, sorry, but it was a blast! I mean there were even overseas testimonials and a disclaimer as well!

He goes to DaCosta’s Mall tries to snatch a purse and the woman asks if he is okay then proceeds to cuff, slap & kick the living daylights out of his already lashed bones! Antagonist then tries to shoplift half of Super Centre Warrens under his slim leather jacket and is foiled as he’s always butting up on this guy with an exclamation mark on his chest, h’mmm?

I learned that Levi King is a true actor since I did not recognise him as one of Antagonist‘s henchmen, he was always chatting quietly in a cell-phone during the whole piece! What a change from Jamal in Sean Russell’s debut picture!

The ten minute piece in editing and everything took eight months to do – at first they gave Neil & Co. a “C” at BCC then when they proved how they did so much with so little and how much was accomplished they reverted the score and made it an “A“!

Neil and his posse are seriously considering to release the debut as a DVD apart from making a TV series out of their adventures with Antagonist Burrows! I hope so and look fwd to that indeed!