BREAKING NEWS – San Diego or Bust, Earthrace is back!

Earthrace is back on track in its attempt to break the world powerboat record for circumnavigation of the globe – while using only renewable fuels. In 1998 the British boat Cable & Wireless set the present record having made the 24,500 nautical mile journey in 75 days. 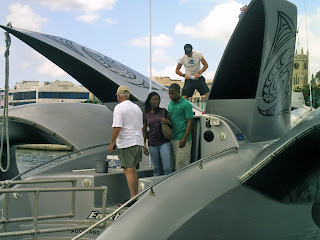 Earthrace began its world record attempt on March 10, 2007 from Barbados, and headed west. However, Earthrace had a tough start to the race. On its first leg from Barbados to Panama, its new state of the art carbon fiber propellers partially disintegrated causing Earthrace to loose two days in the process of replacing them. Then on route from Panama to Acapulco, Earthrace was involved in a nighttime collision with a fishing skiff off the coast of Guatemala and was detained for 10 days by the Guatemalan Authorities while they investigated the accident (Earthrace was cleared of any wrongdoing). And then after a good run from Guatemala to San Diego, Earthrace was forced to remain in San Diego for 6 days as mechanical problems came to light – most likely as a result of the accident. 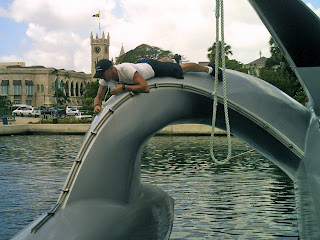 After a great run across the Pacific, Earthrace developed problems in its starboard engine just east of Palau causing the port stop to take 8 days for repair ? this was primarily due to the remoteness of Palau and the difficulty of getting parts and technicians. This latest delay effectively ended any chance Earthrace had of finishing the record attempt in Barbados inside 75 days. 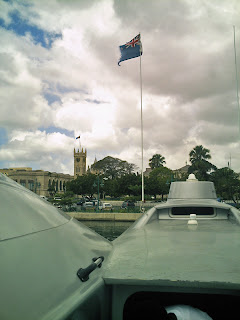 Skipper of Earthrace, Pete Bethune, said “This is quite achievable if the boat has a good run from here“. At the time of going to press, Earthrace was traveling from Singapore to Cochin, India and was making good time, despite some rough sea conditions.

Bethune also said “However, if there are any further significant delays in the next few legs then we will finish in Barbados and know we gave it our best shot“

Bethune further said “It will be a huge challenge to even make San Diego as it means we have to source additional fuel and money – when right now we don’t have enough money to get past Oman. But whenever we have hit a brick wall as regards funding or fuel or progress in general, someone or something has come along to take us just that little bit further. We hope this pattern continues for just a little bit longer“