Bruggadung II won in the just-concluded Angostura Tobago Sail Week, it was captained by Andrew Burke, according to the Trinidad Express –

The Barbadian Beneteau 10-metre craft sailed to victory in the hands of Andrew Burke and crew, with third, fourth and first place finishes in their final three races in the waters off Pigeon Point yesterday.

A classy performance for the Bruggadung II crew on the final day ended with a hefty victory by 26 points over runner-up Storm, the Trinidad-built US craft, skippered by Les Crouch.

Bruggadung II was not the only sailing Bajan who performed well –

Michael Rostant and his bMobile High Tension crew stood as runners-up for most of the regatta, but faded on the final day to finish fourth, just ahead of Tim Kimpton’s Melges 32 Crash Test Dummies.

They finished with five victories in eight races, with another Barbadian craft, Rapajam, an admirable second, and Antiguan boat Huey Too [placed] third.

For those who like to track Barbados’ nautical and nice deeds, here’s the final score – 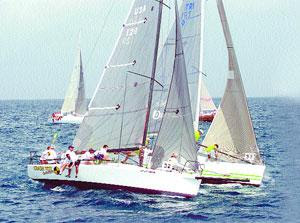