While smuggling, terrorism, narco-trafficking and illegal weapons were the lynchpins of a recent conference at the Hilton between the Regional Security System (RSS) and the US National Guard, 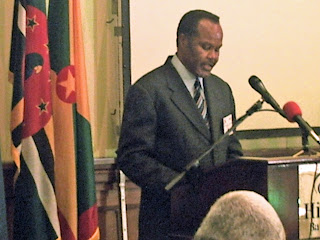 When BR secured a brief moment with Capt. Randolph Straughn – Perm. Secretary in the Defense & Security of Barbados (fmr. Comptroller Of Customs), we learned the Guard has another possible part to offer this country as part of the RSS.

We asked about both radar systems – the Airport’s and the Met Office – while the PS advised us that we’d have to verify with the relevant heads of Department, he also admitted the American military unit (which has been running close to 400 years now) can offer sound advice for what equipment may be needed to upgrade the current systems in use for radars at both stations. In his view, the US Nat’l Guard is well suited to performing such an audit to assist in the smooth running of the Barbadian leg of the RSS. 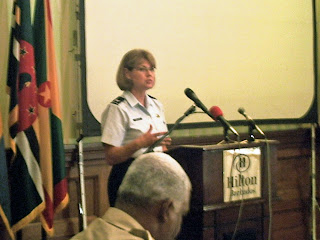 BR also took the opportunity to have a talk with Lt. Cathy Rodriguez, one of the liaisons of the US Nat’l Guard to learn what significance weather had in the more active participation of this branch of America’s military might. BR posed the factor of recent hurricanes Ivan & Katrina may have caused folk in Washington to have a personal early warning system in the Caribbean for any unusual weather…

The lieutenant, while acknowledging there could have been a potential towards such a move in light of those factors, nevertheless failed to give any definite inclination towards such an idea. She did acknowledge that this is the first time the National Guard has been so thoroughly involved in forging a totally Caribbean partnership. Lt. Rodriguez admitted the Guard would be stationed in cohesion with the RSS for an indefinite period – but no bases will be established like what obtained before in the Caribbean with the US Army. The reason for this is the fact that no infrastructure was ratified into this type of a partnership out here. 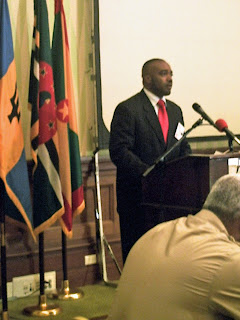 Chairing the alliance announcement session was Minister Rayburn Blackmore from Dominica, who emphasised the need for all components of the RSS, whether individually or collectively, to aggressively combat the end results of human trafficking, illegal arms and drugs apart from the scourge of terrorism among other crimes.

The other objectives of this alliance is to demonstrate the smooth running between US & Caribbean forces in handling various operations; to prove that US military can willingly follow orders from civilian personnel in the correct circumstances – further, when civilian authority requires back-up it is provided swiftly and effectively; the State Partnership Doctrine is also to ensure democratic principles similar to what obtains in the US is followed closely to allow for stable governance and fiscal ties by emulating values as pertain to the core of US Nat’l Guard policies. The partnership even extends itself to education and leadership programmes.