It is said that Egyptians or Thai used cats to guard their temples, they were even worshipped as Gods (explains their snotty attitude, they probably never forgot and still believe the hype) – I can somehow believe that with the weird lot I have patrolling my home, if you call it that….

Mimmo, seen here, must think she’s a mountain lion – after mounting that wall and you feel she’ll get down in a hurry? You lyin’! 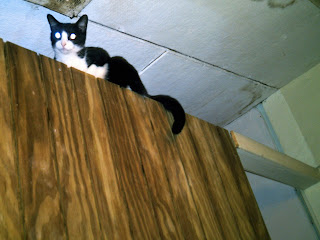 Strypes, our illustrious leader, believes in the power of BOWLing you over… 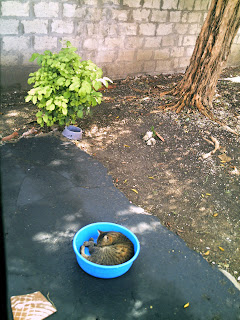 Simon, stepson of Strypes, was already seen in a shoe-case, now he found a new spot and became quite a fan of it! 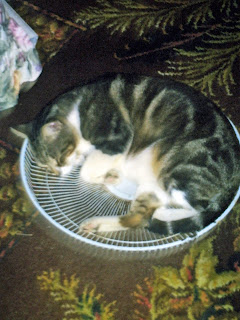 Patch, now the baby again of our brood, must think he’s a polar cat as opposed to a polar BEAR, so he has free license to sink in where he can cool off (do you know there’s a website dedicated for this topic alone?) – 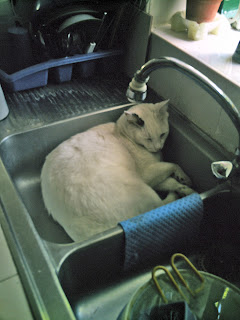 No weird shots of Tipi and Simmy yet, when we do we’ll post them – we’ll also add the honorary feline “Lady” [the dog who thinks it’s a cat]!