As I mentioned in the previous entry, my Shrek The Third review from IMDb was put on the kibosh, so I have included the new submission here in case it too gets axed! So? Far Far Away we go – 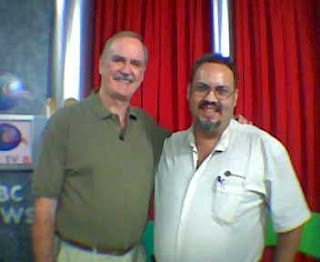 I have a direct connection to the movie, I had the privilege of interviewing John Cleese (My God, he’s tall – I’m 5’11″and he dwarfs me) in late December 2004, he had just completed his part for the movie and was resting here in Barbados! Obviously, the digital animation takes longer than the voicing for the project!

It is so sad therefore to see what a small role he played in Shrek The Third, but it was hilarious for a prolonged death scene – only Dreamworks can pull that off and make you smirk!

This movie finds Shrek having the duties of royalty foisted on him, when all he wants to do is be in his swamp with Fiona – yet even if he heads back there, he finds another surprise… Fatherhood! On an aside to the real world and not part of Cinema yet related – why do those who don’t want kids seem to pop them out of their ears and those who want a brood have to wait so long?

If Puss Y-Boots is not careful, he’ll be a daddy too many times over! Loved his farewell scene with all of the female cats, what a viejo salsito Tomas or saucy old tom; “You I do not know, but would not mind to get to know” (I’m still of the view there should be a spin-off with this particular character)

Donkey is easily a very happy dad with five fire-breathing baby-burros! So the trio go and look for Arthur, the replacement for Shrek as King… This character is voiced by Justin Timberlake (ironic, as he is the “ex” of Fiona’s voice, Cameron Diaz) and it seems he is a dorky teen!

The Worcestershire College he attends (pronounced “Wuss-ter” BTW) is a mix between Beverley Hills 90210 and Gilmore Girls, Shrek thought Lancelot as the handsome successful knight was the dude he’s looking for – but unfortunately, Arthur just finished playing a quintain, or jousting dummy, for the same Lancelot! 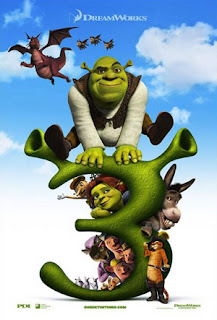 At first Artie, as he likes to be called, looks at Kingship as giving orders and being pampered until Donkey inadvertently reveals the true responsibility of ruling a land.

It takes his former teacher Mr Merlin to try and get him to realise his true calling and even what Shrek must acknowledge as being a parent!

Meanwhile, Charming – as sneaky a cad as ever thanks to Rupert Everett – is plotting with the more modern fairy tale characters to pull a coup on Far Far Away. Hook from James Barrie plus the Grimm Brothers’ Rumpelstiltskin and the talking trees which feature in many tales…

This film even took an askew look at EB White‘s “Once & Future King” for good measure! This, I hope, is a portent that other genres can be explored like Anansi from the Caribbean (A telephone operator or pizza-baker?) or Paul Bunyan from the US (Reduced to replacing lightbulbs in streetlamps?) or even the steeplejack from Britain (Is he a portable chimney weep?)! This means there can be at least another two Shrek pics if you include Fiona’s pregnancy!

Eventually after being nearly jailed thanks to Rapunzel, Fiona with the other Fairy Tale Sistas (Snow White, Cinderella, Fiona’s Mom the Queen as delivered by Dame Julie Andrews plus Sleeping Beauty) battle the Palace Guards! 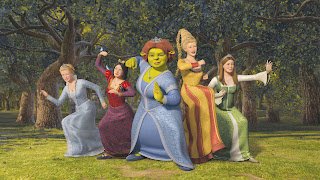 Snow White via song controls animals; Cinderella knocks the spit out of guards with her glass slippers but the classic is Sleeping Beauty who literally FALLS asleep and knocks henchmen out like ninepins!

Does Shrek get back in time? Does Artie accept that with Great Power Comes Great Responsibility? What about Fiona? Is it a boy or girl or both? Here’s a silly hint – remember the digital animated feature’s title…