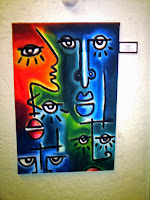 Holders Great House is an enormous sprawling mansion that is right next to the polo field which is always advertised in the newspapers as having a match – but do you realise the ads never listed the location where Jeffrey Evelyn, Select Magazine and the Williams clan go to do a chukka or two? (You know, it is so ironic that polo is deemed a white man’s sport, when it really originated in part with non-Caucasian Genghis Khan, who used it for teaching his men how to behead their enemies in battle while staying on their steed) Now you know… 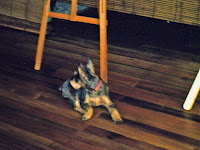 I knew for sure when I saw flags touting Piaget, Breitling & Diamonds International which were draped mournfully in the soggy twilight that infamous Tuesday… It was to have been an art auction to assist the Future Centre Trust – Dr Colin Hudson, the late co-founder of that worthy idea, was also the inventor of the cane-harvester for Barbados.

Nowadays the Future Centre Trust is doing like Earthrace and looking at biodiesel as a viable alternative for fossil-fuels, this is thanks to people like Handel Callender and Nicole Garofano with Dr Basil Springer. 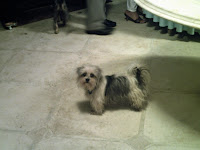 Stokes & Bynoe were on hand to give a wide variety of cheeses, hummus, grape tomatoes, grapes, biscuits/crackers and wine for ppl to nosh while browsing at the art on display. As the folk moved about the porch of Holders Great House where the carvings, sculptures, canvasses and jewellery were on display – the two canine militia deployed themselves to see what all these ppl were up to; one looked a bit like a smooth haired schnauzer while the other was a glorified powder puff…

Did I mention the rain? It never stopped droning on to the roof that night, it only seemed to diminish when that delightful Peruvian guitaress, Eliana Marcenaro, played to the folk while they guzzled away at the free goodies. 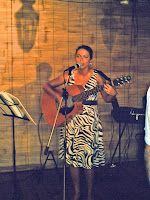 My favourite was a piece from Maria Elias which was water based paint put on cotton, creating a batik-like expression but a whole new way of performing that type of art experience. The opening bid for her “Masks II” was to be $840.00, rather reasonable as items were listed that evening – but then it’s for charity right? Hah! The colours were bold, dynamic and refreshing!

Rather similar in colour scheme was Ras Akyem’s enormous canvas of “Atonement #2” but his opening pricetag was definitely meant for the Sandy Lane crowd – $5,525.00! 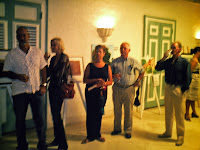 The Art Auction was to start at eight and started about 8:15 pm instead, hoping against vain hope that some ultra-rich person with money to burn would wander in at the last minute, but when a couple left after they had their fill, ye olde participatory journalist suggested that they better get under way before more follow suit… 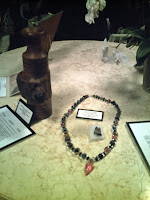 What a travesty! The auction was over at 8:45 pm, with a pitiful few items bid on – even trying to use a guilt trip on the crowd that many of the artists were present (this is true – Susan Alleyne-Forde, Henderson Reece, Steve Ludwick, Neville “Oleyumi” Legall, Shay Cozier-Clivio witnessed the carnage), was as effective as a grain of sand pitched against a granite dartboard. 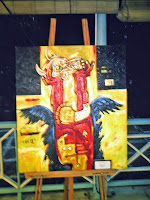 One of the biggest bids that night occurred only when one artist assisted another – Henderson Reece bid on a Legall painting and after directly negotiating with “Oleyumi” was able to purchase it at slightly under the reserve bid! Even items at $220 or $170 failed to get any of the folk dragging at their purses or wallets.

In my view, perhaps there needed to be three or more items from each artist and perhaps all at $1,000.00 or under… But to attend a show, pay a modest entrance fee of $35, then Hoover a pound of Gouda and see what’s the latest to slurp from Ernesto and Julio is the height of greed, knowing it was a charity event. As it is, if they made $3,500.00 they did a mint! 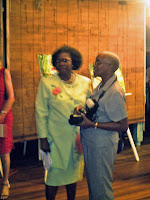 To be fair though, I see the Future Centre Trust nevertheless did not state what fund-raising efforts they planned to do with the loot raised – but I can see an area they need straight off the bat; a website – that is not cheap nor can it be done overnight like this blogsite!

I also understood this is not the first time such a venture from them flopped, so they really need to revamp and fast, if the Trust is to have a future! 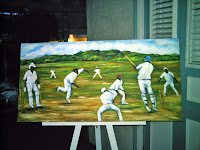