For me, Thursday 19th April 2007 was the West Indies real Last Day with Lara – even if he did make 33 and not 156* like at the ARG/Antigua Recreation Ground back in 2003 or so, he was under the gun then too and put the bowling to his (still, for me) mighty blade of a bat!

It was real cricket as Caribbean ppl and foreigners came to see a REAL cricket match not the posh silent claps that the patrons of Lords do for applause, this was the hot, sweaty wukkin’ up kind of brawling voudou chant of drums plus the Call & Response of True WI Fans as they share drinks and food and catch up on old times while the men on the field do the talking for us to foreigners that have, will or are doing us bad! It was because of REAL cricket, in letting Tanti Merle back into De Oval, that there was the most ppl I saw at a venue for CWC 2007 so far, at least 62% occupancy to me, and not foreigners but locals too! 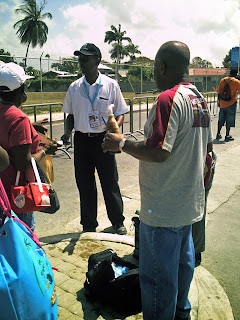 There was still some searching, some folk were halted for bringing Pepsi – an official sponsor – the volunteers said customers are supposed to buy from inside! There was quick talk with a supervisor as a traffic jam started to build and they let the folk ease through… Luckily for them, since soft drinks were four dollars each and beer was seven bucks a shot and if you wanted ice? One dollar, please! 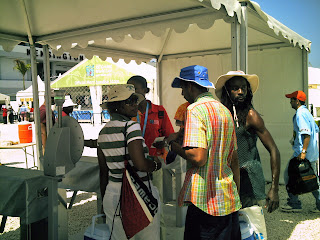 Folks not smart enough to bring food had to fork over 20 dollars for a styrofoam box that looked about half of the size of snack-box, conversely when the match was done – a bariffle of coleslaw/potato & garden salad with a big chunk of ribs from St Leonard’s churchyard was only 15 bucks!

Okay, now the bad stuff is out of the way – when I reached the North Stand (this is really north-east as I mentioned before – all cricket, lawn tennis and badminton courts, etc. are laid north to south, so the sun does not affect players of either side too adversely) I did not know what to expect, but I was in for a treat!

I like the huge new screen, I can read it with or without my glasses! 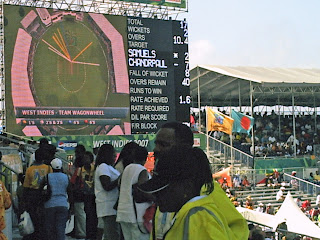 As I sat, I saw all kinds of folk entering – men with ties and bluetooth earpieces; locals and many Indians… Even a hurt foot could not keep away one fan! 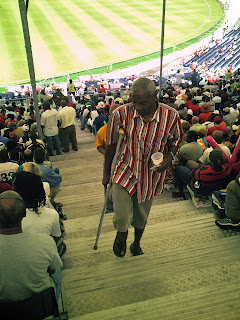 Good thing too, as the ODI/One Day International of Bangladesh versus West Indies was real hot! 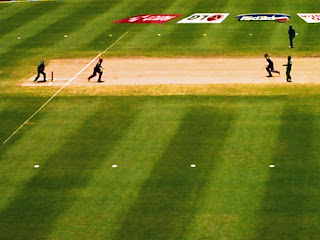 The action was so hot, it made for all kinds of headgear – 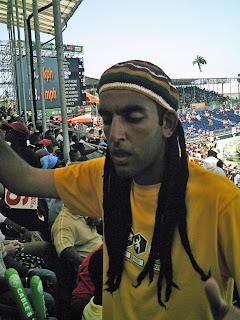 Most of them resembling Dr Seuss – 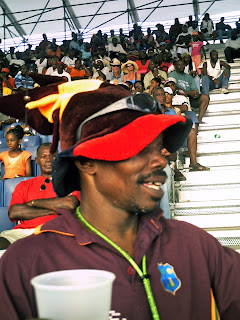 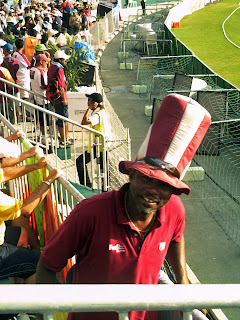 Flags in one form or another were proudly shown – 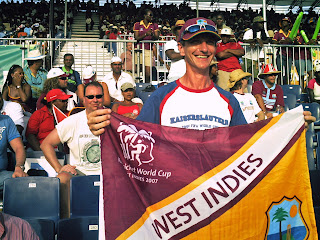 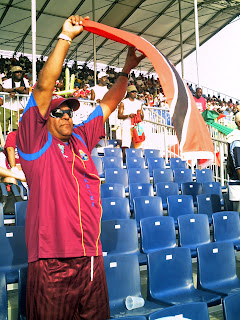 Even as a cape, like if they came from Krypton, LOL! 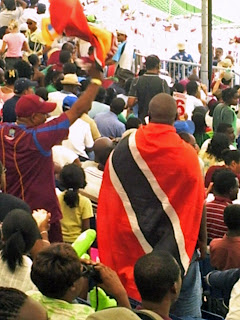 It was all caught by local and foreign cameras- 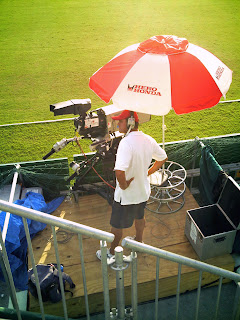 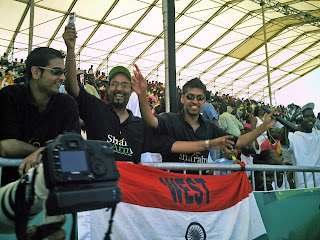 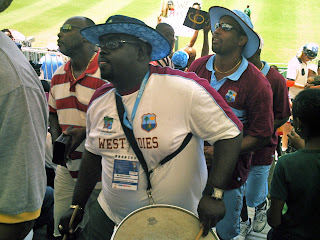 You could hear their version of “Roll” – 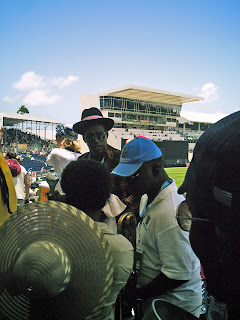 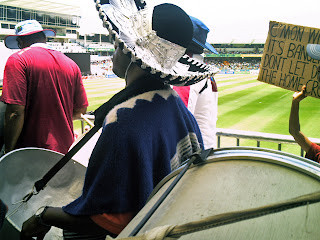 I am sure the West Indies played better for the music and revelry, when they made a four, the North Stand rattled with what seemed like the Last Rainfall of Earth as fans stomped their approval on the galvanised floors – 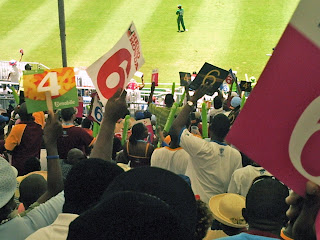 When Bangladesh reached 90 runs for 6 wickets, it slowed down with a lot of no-balls, and I was actually starting to doze… Then suddenly? 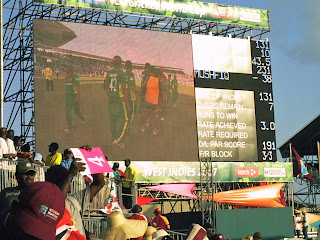 I learned it was the first time for cricket for some who pledged to return, considering the great company I had, I look fwd to ensuring the promise is kept! 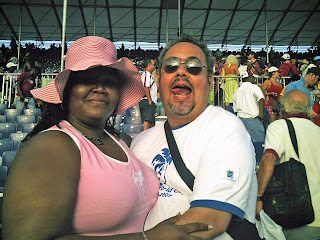 To my mind, despite the slings and arrows of outrageous fortune, or misfortune, WI/we have suffered, I look at this as the beginning, not the end! Caribbean and Overseas Fans, WI and Opposing Players and the venue itself – now rejuvenated like Arthur drawn from the depths of the Lake to reclaim Excalibur!

I am also put in mind of this –

Aye, we/WI all shall await, the once and future Prince – paraphrasing Bill even further for ol’ BC Lara? Flights of angels carouse thee, O Mighty Prince, I for one shall miss thee!