{Ed’s Note: I have been a very baaad boy but my day job has kept me swamped and covering these events outside of my regular duties left me with little energy to compile the data, this is actually the 6th of April but as I saved it as a draft – it still has the date of the 3rd! Plus S-L-O-W internet has not helped either, am using long weekend to catch up; plus many new features coming too! IDB} 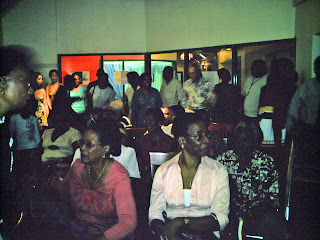 Like a highly touted match, the Spirit Bond in Bridgetown was packed – the event was the launch of the Arts Etc cricket anthology “Shouts From The Outfield,” the venture was a long process envisioned and engineered by Robert Sandiford (winner of NIFCA’s Literary Arts Governor General’s award 2006) and Linda Deane (Frank Collymore Literary Endowment winner 2006). The project in and of itself can be considered as a premature baby, its birth was really for 2008 and brought fwd to this year due to CWC 2007 and is already off to a healthy start! 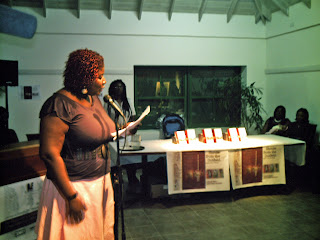 Emcee (and contributor to the anthology) for the night was Nailah Folami Imoja. The obligatory opening remarks were given by not only Robert & Linda, but there was an appearance from the NCF by way of DeCarla Applewhaite (the Foundation assisted in making the publication a reality), who favourably compared the Barbados launch to when JK Rowling initiated the Harry Potter series – she paralleled both ArtsEtc and Rowling in knowing your market and when to act on that knowledge.

What it seemed most ppl came for was performances from the anthology – no less than Winston Farrell and Deanne Kennedy were present! Ras Farrell had a beautiful call and response with the audience for his own poem “The Wicket” which led the opening batting for the evening’s innings… 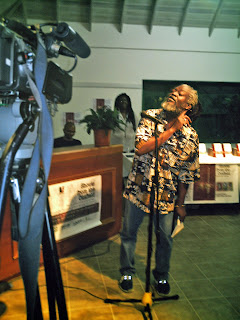 Ras Farrell had the crowd in the palm of his hand! Deanne Kennedy kept the crowd in stitches with her performing Katy Gash’s “There Braddie Stood” – 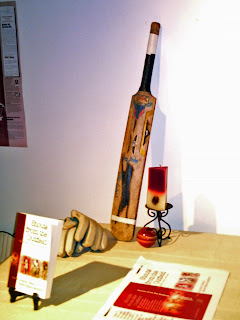 So there Braddie stood, staked out alternatively at extra cover or third man, bald patch sizzling, hat home on top of the larder, and tummy grumbling. Sweat, which he was quite sure originated from this god-forsaken bald patch at the top of his head, trickled down and pooled in the furrows of his brow before spilling over into his eyes.

There was also an unexpected delivery that evening of James Carmichael’s “Not Enough” from a former CBC TV-8 anchor who would jump the crowd when he bellowed “SHOT” or SHAWWWTTT as the story says. James went to the same school as the Reader but Jim is over in the UK completing his Uni studies – when Bajan Reporter spoke to him online; James admitted the story is loosely based on cricketing legend, Sir Everton Weekes. A full interview with James coming soon… 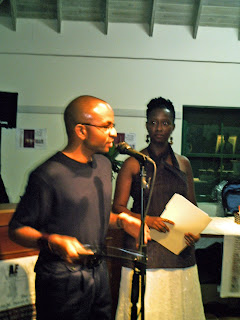 Published by AE books with a distinctly different cover from Ewan Atkinson. The book is not just tall tales surrounding the glorious uncertainties of this game called cricket – there are commentaries and reminiscences as well! There are words from Paul Keens-Douglas (how could you do a Caribbean cricket book and not have him in it?) as well as Austin “Tom” Clarke and Tony Cozier…

Arts Etc is also planning on launching a website soon, we’ll keep you posted! In the meanwhile? Make runs over to your favourite bookstore and look to field your copy!