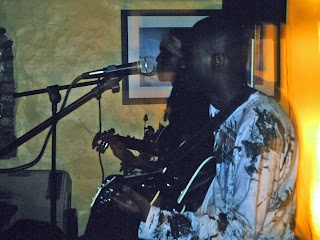 Every other Friday or so from 2005 to now – I have trekked to Hastings. Specifically opposite the Carmax outlet. There is a Greek Restaurant called Opa! which is a Grecian phrase usually accompanied by smashing plates, it can be equated with “Wahoo” or “Yahoo” or similar cries of elation.

The drawing card for me has been the acoustic sounds of Garvey and Alex – they are known as Garlex, and their 2nd anniversary of playing at Opa! looms very soon, like June… I look fwd to when they assay their own album, they can do original tunes – both Garvey and Alex have their own material – there’s just that one idiot who keeps calling for them to do “Vaseline” which is a song about onanism!

Some of my favorite memories are here at Opa! – this is where I saw the launch of Jomo Lord‘s career…

On my part, I thought his stylings are very reminiscent of Steven Page, the bespectacled lead vocalist of Barenaked Ladies; he also looks a bit like him! 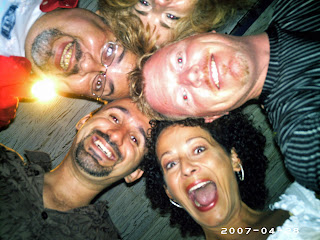 Jomo appeared at a folk festival in Canada last year and has worked with Brian Marshall ? who?s now part of Kite ? in the erstwhile local group known as Purple Turtle Injection and they played at Harbour Lights a few years ago?

Now on his own, Jomo took a phrase that Brian said one night when the audience appeared to be unappreciative; ??the natives are getting restless?? (Yeah, it?s an old phrase, but I can imagine how Brian would?ve said it ? also, I am fully aware of how insular most Bajan audiences can be; thankfully, there was a very sensible crowd at Opa?s last week) and he wrote an entire song based on that catchphrase! 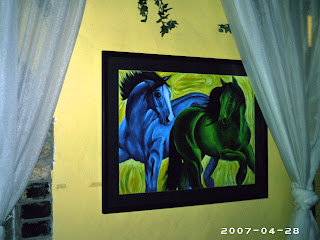 The song appears to be examining self-imposed isolation from reality as ?the jungle? of reality itself encroaches those false ramparts blockading yourself from feeling what?s really happening around you.

It was also part of the stepping stone for William White, whose next album will be out by January 2008 –

[William White‘s] music and melody is clearly geared in what is known by some as alternative and others prefer to refer as ?Adult Oriented Rock,? but his lyrics are his own universe and we are the better for his having shared it, even if the ?Opa!? audience seemed to be listening with half an ear? 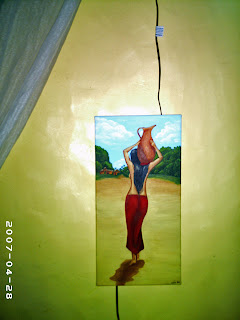 This was a concern that William shared with me and I did agree with, he observed he appeared to be performing only for himself after last Friday?s performance at the south-coast establishment ? unfortunately, many Bajans go to a venue simply because it appears to be stylish to do so, and not because they genuinely want to discover a new artform.

A lot of us can be quite damn rude at times and not give applause when due and we have to be herded like cattle into admitting at the very least that the music was ?okay.? 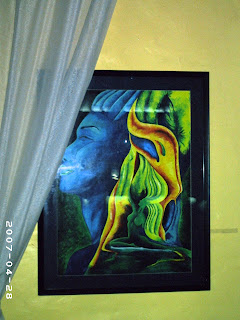 Fortunately, appreciation for Garlex , the main drawing card of Opa, is not the reluctant kind and now their manager – Amanda Hoyos is playing a major part at many levels too!

She contributes art to appear at the restaurant (must remember to ask if they are on sale or just for drooling over); right now – there are three of her paintings… There is a lady in a sarong hoisting a water jar which kind of reminded me when Mowgli went to civilisation in the Jungle Book. She also did one of two very powerful looking horses – but the one I liked was the ethereal multi-portrait of a woman, far yet near… Magnificent! These works came from her days in “A” level at the B’dos Community College. 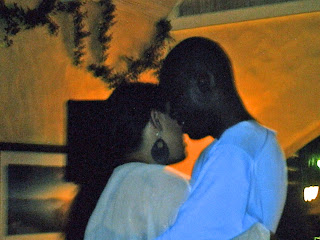 Her version of the Cranberries’ “Zombies” is just as eerie as the original! She also tackles Natalie Imbruglia’s “Torn” as well as “What if God was One of Us?“, the theme for the once-great show “Joan Of Arcadia” – Prince remade it, but the original still kicks from Joan Osbourne who actually remade the theme to fit the tv series.

Another way Amanda has made waves at Opa! with Garlex is the December night when Alex her boyfriend proposed to her in front of everybody that night! He told me how his heart was pumping and thrumming in his ears ’til it seemed like the only sound in the world… 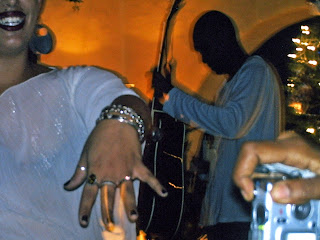 I can well believe it having been so brave to do a similar deed on an early November day in ’98!

Alex even went so far as to get down on one knee to do the deed, and when she said “YES” I am sure there was not one dry eye in the house… Alex’ version of James’ Blunt’s “You’re Beautiful” never seemed so appropriate as that beautiful night!

It was also a great photo-opportunity for Amanda to show off her bling that night to all and sundry!

Amanda is not the only person who sings with Garlex, 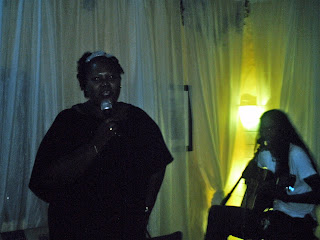 there was a brave lady who did a karaoke without the words on a screen! She took on Alanis Morrissette’s “Hand In My Pocket” and almost sang the whole song! Garvey praised her as the only other amateur person brave enough to actually go up and sing apart from Amanda!

Toby from Roadhouse has also guested with Garvey at Opa, that was a great night of serious jamming with blues-styled guitartistry at its best! Opa! also has two happy hours now – 5:00 pm ’til 7:00 pm and again from 10:00 to 11:00 pm every day! All kinds of great stuff, not just Greek food, but items like Pizza Wings – have to try that one! 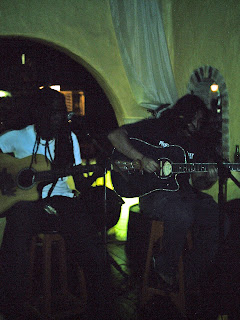 Prince, who we mentioned before, always points out that parties weren’t meant to last – but when Opa! closes at about 2:00 am on Saturday morning more often than not you do not feel to stop jamming!

I remember when I joined my current job, this was where I came to celebrate and I spoke with CBC 900’s Andre Harewood over the joys of watching Rick Mercer – when they were closing down they played “Why Don’t We Get Drunk” and I shocked everyone in knowing by heart all of the words!

Hey – it’s one of Jimmy Buffett‘s most famous songs that can’t be played on radio at all, so of course it makes it sweeter!

Nevertheless, this weekend I was a bit naughty, I decided to go another place when Opa! closed – Garlex and Amanda headed for another venue, but I decided to move closer to home (something kept nagging me I’d be sorry if I didn’t go, so I usually try to heed what I call my mind’s eye), so I decided to follow where my instincts were dragging me! 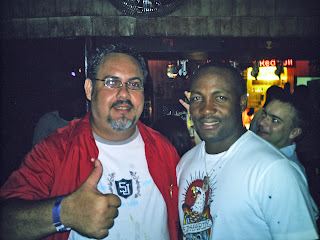 Well-well-well, as Popeye would say… Blow me down! Look who stopped for a Heineken! B. Charles Lara! I told him of course about my News-Blog, apologised for humbugging him and also told him my mother has vowed to refuse to watch cricket anymore since he is not playing, but he says he is mulling over that decision – it also seems he watches Barry Wilkinson‘s Line & Length when he gets the chance!

Of course, what kind of blogger could I be if I didn’t beg to get a photo with the man just shy of 12-thousand runs? Having this evidence also saved me from the wrath of She Who Must Be Obeyed, as the sun was shining when I got in! I left Lara dancing with a cute chick (one of many humbugging the poor man, but he took it with bored yet chuckling aplomb). 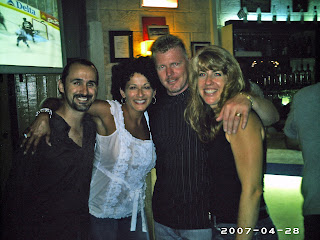 So, a night of hit alternative tunes wrapped up with a chance meeting with one of cricket’s most amazing players – thanks to a fancy little Greek restaurant in the heart of the Barbadian South Coast! Make sure you head over to Opa‘s soon and tell them where you saw the article, too! Great staff, great music, great food and great atmosphere – Opa!