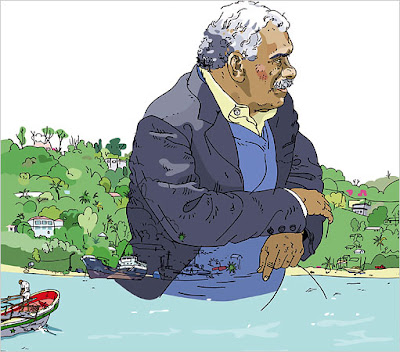 They named a square after him in Castries, his plays have been throughout the Caribbean and there were two I remember here in Barbados – “Remembrance” and “Pantomime” where Crusoe and Friday were done by Patrick Foster & Clairmonte Taitt respectively as in a modern day bed-and-breakfast resort with Crusoe/Foster as the manager and Friday/Taitt as the Barman/Food&Beverage… Both tv and play was “Ti-Jean & His Brothers” also with Clairmonte…

Now it appears in the latest NY Times, William Logan – a fellow poet (to my mind, not as accomplished) has set himself the daunting task of attacking this laureate, this poetic Colossus – Derek Walcott, acknowledged by the Nobel Prize in ’92 as the first in the Caribbean to earn such a nomination in Literature (Sir VS Naipaul was the second) and Logan fails… He seeks to insult him in one breath and drool over Walcott on the next –

Walcott?s most fluid and achieved work lies in the books from ?Sea Grapes? (1976) through ?The Arkansas Testament? (1987), where a mature intelligence no longer wrestles with language like an Antaeus, but subdues it by being subdued. ?Midsummer? (1984) long seemed to me the exception, a laggard book of hours by an author too often at his desk. Reading the selection here, I realize I missed something. Without the shape of the lyric subject, Walcott?s poetry becomes the registration of sensibility ? and in texture and sensibility he has been a master, even if the redolently patterned verse has sometimes been laid down like linoleum. Overstuffed with images, his languid, occasionally lackadaisical style is more in love with words than with what they represent. He?s a better poet when just mulling things over, in a louche beachcomber-ish way ? when he talks politics, the taste seems bitter in his mouth.

Knowing Caribbean politics for what it can and cannot do and seeing that as far as I know, Logan has never set foot in the Caribbean far less Castries, I would well deem that an assessment of realpolitik for this part of the world would be anything but sweet… In other words? Butt out from what you’re not qualified to opine upon, Logan!

I saw men with rusty eyeholes like cannons,
and whenever their half-naked crews cross the sun,
right through their tissue, you traced their bones
like leaves against the sunlight; frigates, barquentines,
the backward-moving current swept them on,
and high on their decks I saw great admirals,
Rodney, Nelson, de Grasse.

This language from Walcott is seasoned like a roti or jerk-chicken or pork, it could well be that Logan may not have a palate nor a stomach for Caribbean cuisine… For me? I think Logan is bitter he never copped a Literary Nobel Prize and he may think to himself what right does this bumptious wog from the boonies have in earning a million dollars and a prestigious award way before him? Logan’s samples of his poetry leave very much to be desired –

Logan’s distrust of narrative is made explicit in one of the best poems from Sad-Faced Men, “The Man on the Bed,” in which he describes his grandfather’s use of anecdote to persuade “Midwest housewives to buy / His merchandise“:
My grandfather was no honest man,
For honesty is of little use when a man,
By profession, sells kitchen gadgets
To people who will be hard-pressed recalling
The reason for their purchase.

Hey, wow, I am so gonna rush to buy that book …. NOT!! Please, Logan’s assessment by me is not alone, and don’t get me wrong, I am no poet nor do I have any pretenses that way, and yet, I think I can appreciate it more for my ignorance that way.

But don’t take my word for it check this too –

For me having looked at both articles and having directly experienced some of Derek Walcott’s work – I just wanna know where the hell this William Logan gets off? It seems he loves to tear down his counterparts!

Too often ”Later Auden” tracks themes like boot prints. There’s nothing wrong with themes, as far as they go: they may reveal the artist’s silent construction of himself. But they can never tell us what makes love dull as dirt in one poet’s words and a deathless phrase in another’s.

Even if I insult the daylights out of something I usually advise ppl not 2 tek my word 4 it but go and see 4 urselves! The coup de grace is in concluding, Logan has contradicted his own comments from before!

Walcott has captured his islands with a lushness and richness rare in our poetry ? the outposts of empire once seemed as strange as Kipling?s India or Bishop?s Brazil. If air travel has brought them closer, it has brought their tragedies closer as well. No living poet has written verse more delicately rendered or distinguished than Walcott, though few individual poems seem destined to be remembered. For more than half a century he has served as our poet of exile ? a man almost without a country, unless the country lies wherever he has landed, in flight from himself.