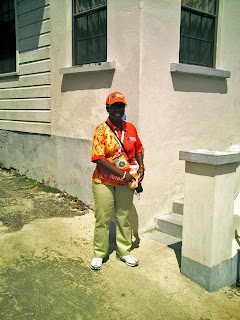 is now at 50%?? Full page ads for Cave Shepherd ran in the newspaper both Wednesday and today! Those volunteers were damn lucky, huh? Freeness galore! Chaa…

PLUS: Can you imagine laying out enough money for the CWC finals that is the equivalent of a down payment on a car or a mortgage payment? Well through “This & That Bajan” a gmail-based advertiser, there are two fellows with some offers that would really hit most ppl’s pockets for six!

Four tickets to the CWC Final in the South Stand (next to the media center) for sale at Bds $400 each or nearest offer.

Call David on 256-6886 or email davidseaside@caribsurf.com

Here’s the other offer – 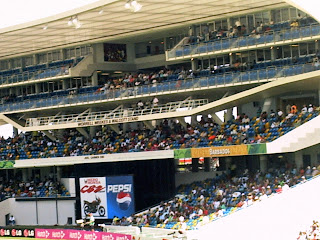 I would rather use that money at the supermarket to feed my family! Be that as it may, I wonder if the tickets will sell? It’s Sri Lanka Vs. Australia, no West Indies playing…

Speaking of which, this item is circling the Internet –

Please everyone just forward and forward quickly if you feel the same way. We constantly send around chain letters for stupid reason.

Finally we have something of merit. We are aiming for 50,00 people before the Team goes to England. List your names below the letter please.

Dear Mr. Lara, We the Caribbean people have denied your application for resignation at this time for the reasons listed below. We would be happy to reconsider after your tour of England.

We will continue to stand fully behind you as the greatest batsman that has ever taken that hallowed trek to the middle to represent us as a people. Reasons for denial:

1. You are 47 runs away from being the first man to 12,000 runs, (give us something else to shout about).
2. You are scheduled to play next in the country that you made the highest International individual cricket score in and against the team which you broke 2 test records (give us something else to shout about).
3. These are the difficult conditions that you know so well when most of our other players will struggle.
4. You have at least 2 other double centuries in you.
5. You had promised to go to England with the team and then put your feet up for the ODI’s.

This is just the start if you need more reasons ask the majority of Caribbean people that you will encounter on your daily journeys. We are obviously crushed by our World Cup defeats but we have only ourselves to blame because we were not prepared adequately as a team or a region.

The solution is just not looking for causalities but making the correct decisions and implementing the right structures and systems to move on. We decided to get rid of Desmond Haynes and we have not found another competent opening bat since.

Don’t allow history to repeat itself at this time you are our numbers 3, 4 & 5 batsmen in any test team that we pick currently. Please don’t bow out when we need you most to start rebuilding. Give us something else to shout about again.

GIVE US THE OPPORTUNITY FOR US TO STAND AND APPLAUD AS YOU LEAVE THE ARENA THAT YOU DOMINATED IN YOUR WHITES WITH YOUR MAROON HELMENT AND BAT LIFTED FOR THE FINAL TIME. GIVE THE PLAYERS THE OPPORTUNITY TO GIVE YOU THE GUARD OF HONOUR IN THEIR WHITES ALSO. 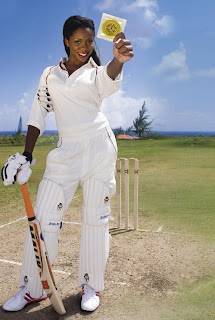 The other cricket matter was the very clever campaign for sexual safety from the National HIV/AIDS Commission which has come under severe criticism from many quarters of Barbados.

Within the last fortnight, Sir Frederick “Sleepy” Smith called on Brass Tacks at Starcom, blistering over the ad where a son gave his old father a condom… Why not? What is the big deal? Many old men feel they are invulnerable to AIDS as they were born before the epidemic! Yet there was “Sleepy” getting his comments edited on-air , he was about to tell listeners what he would do if his adult son gave him a condom before a date! I have a feeling he was implying his son was not too old to get a cut arse!, LOL!

David “Joey” Harper of the Child Care Board also stuck in his two cents – his contribution was for the 8:30 am edition of the Latest on Starcom, he thought a woman equating her vagina with a wicket is degrading for women and to the model as well! Well, here’s a big news-flash… The lady who posed for the picture had no problem in making such an equation that her sexual equipment was like a sport and winning it – 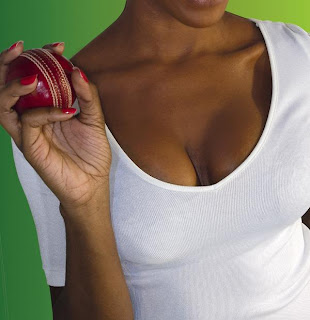 in fact, if she thought something was degrading she’d kick a fuss!

Alyson Holder is a very popular model, and she also believes in causes and issues – doing the Anti-AIDS ads was not for money (she was paid a nominal fee – but that was not the point), it was to make sure ppl did not end up dead! Plain and simple… I can attest that lust is definitely in the air with cricket – when I was at Kensington, I saw many fine looking black ladies chatting up or being chatted by young strapping white guys, both sets looked eager and willing! Better to pad up than be bowled out!