Rene Holder from Pun De Grill sent me an item from Hello, thanks! For me, I think the time has come for Kings and so forth to join other obsolete concepts like Women Can’t Vote Jews Hold Money So Must be Cooked and Blacks At The Back Of The Bus among other evil ideas that held sway over the centuries…

However, while we’re stuck with it and no sight of a Republic yet (Perhaps as we also have to bear in mind that where most Royalty is left is also where we get big tourist bucks?), there are some Royalty folks who try to be noble… Prince Harry got it in his head that if UK troops are out in Baghdad, Kirkuk, Najaf and other Iraqi places doing Blair‘s bidding to make it easier for Cheney’s pawn – Bush Jr – to get cheaper oil for the USA, then he should be out there with his countrymen who are risking their lives fighting somebody else’s war! 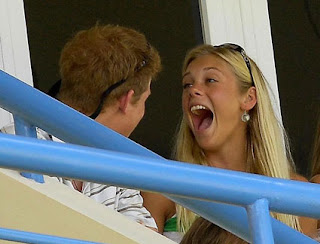 So, before you go and do that set of insanity (hats off to Alexander, Leonidas and other leaders who fought from the front with their troops), is only natural to fire a drink or five and scope a nice young daughter – who knows when next you gonna get some?

Now Barbados Free Press say Harry is over at Coral Reef, this is not what Hello is saying –

The young royal and the pretty South African smooched and laughed their way through England’s crucial game against Australia in Antigua.

Twenty-two-year-old Harry wore a striped polo shirt, while his girl was showing off her shapely figure in a green and white top and denim mini.

“Chelsy looked gorgeous, and Harry was all over her throughout the match,” said an observer. “She obviously feels she’s his special girl.”

The young lovers are currently sharing a romantic break on nearby Barbados, enjoying quality time together ahead of the Prince’s deployment in Iraq, where he will be stationed for six months.

And the pair’s appearance during their three-week Caribbean break at the sporting event was a rare sighting, as they’ve spent most of the time closeted in their room at the Glitter Bay resort. 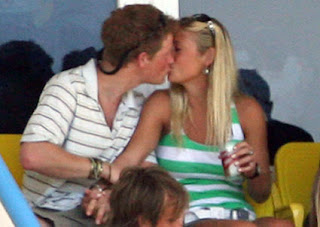 It seems Harry is not the only popular Brit here, it also explains why there is the mix-up as to where Harry is staying –

…the young Prince caught up with a little sporting action of his own, joining Top Gear presenter Jeremy Clarkson for a game of tennis. The TV personality is holidaying with his family at Barbados’ Coral Reef resort.