Eat your fruits & Vieggies, kids! You too may fly to Barbados! (Conclusion)

Remember back in February we talked of how Brit kids were competing for trip to out here by praising vegetables? Well here’s the winning poem from the Hertfordshire lad – 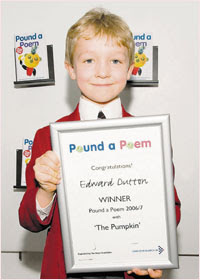 I’m an enormous pumpkin,
I grew in Edward’s plot.
In the October sunshine,
I glow orange and hot.
I won first prize in Potters Bar,
The biggest veggie there,
I am the proudest pumpkin,
Because of Edward’s care.
At Hallowe’en my tummy’s scraped,
Eyes, nose and mouth cut neat.
My candle burns so hot inside,
I’m off to trick or treat.
Boo!

That’s the winning entry from Edward Dutton, who is quite naturally, very pleased –

Edward was presented with his prize by Children’s Laureate and author Jacqueline Wilson at an awards ceremony at Waterstone’s in Piccadilly, London.

His mum, dad Jeremy, sister Maria, aged 10, and brother Matthew, three, were there to watch him receive his prize.

Pupils in years three to six had been asked to write a poem about fruit and vegetables and pay ?1 for each poem they entered. All the money raised will go towards research into children’s cancers.

The reaction reached here in Barbados, this is what the Daily Nation said –

…[The] Barbados Tourism Authority vice-president of sales and marketing (Europe), Petra Roach, presented seven-year-old Edward Dutton with his first prize of a holiday to Barbados in Cancer Research UK’s Pound A Poem competition.
Pound A Poem is …. supported by many public figures, including [UK] Prime Minister Tony Blair; and is promoted in schools. It focuses on healthy eating, literacy and citizenship.

So, now is a good time to turn a new leaf and take in more fruits and veggies – as who knows how far it will go?