Dartmouth Graduate was shy at 15: Peruvian Transplant no longer shy, wants to sing and teach in Barbados 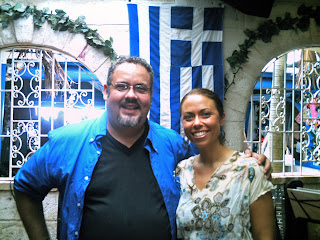 Eliana Marcenaro is a young lady who has accomplished much in life – she earned a scholarship in Peru to go to Dartmouth, she taught in the USA and was an interpreter as well, after that she came to the Caribbean to do something different!

Now, she plans on making her singing a regular part of her life!Pupils at the Codrington school know her as one of their teachers, but Eliana has also performed during a break of Garlex while at the Opa! Greek Restaurant in Hastings… This is a far cry from the (then) shy teenager who was given a guitar by her father for her to entertain his friends and hers!

Eliana has also guested at the Canadian Women’s Club Auctions and was recently at Holder’s Great House – now she is looking to do more musically… Apart from the early teens picking at a six-string, what else did she do? 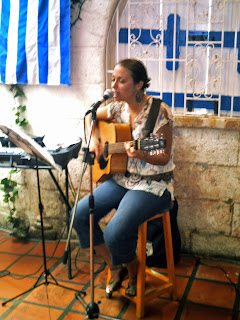 Her musical buds started to sprout at School Talent contests in Peru, and she can also play the flute and alto-sax; when she earned a scholarship to go to Dartmouth at 18 she was part of the Dodecaphonics there and they did a CD with specific sales targets in mind.

Later on, back in Peru, while teaching High School there she also was part of a jazz band. Eventually, she jumped at a chance to live in the Caribbean – even though she had no idea where Barbados was, she had to look it up on a map and still wanted to make the move!

So what’s next? She says she is pondering gigs for somesouth coast venues, especially if the schedules can alternate for different days… 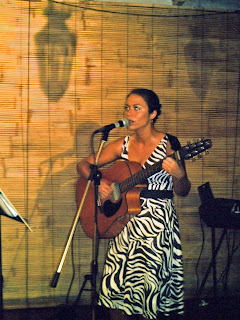 Her repertoire is quite extensive as she has both Spanish and English tunes to draw from – she is just as comfortable handling Shakira in English as well as her tunes in their native tongue; Tracy Chapman’s “Talkin’ ‘Bout a Revolution” or Sting’s “Shape Of My Heart“, even some U2 thrown in for good measure – her original material has not been publicly released yet, but she may change her mind… If you see her performing soon, just keep asking enough!