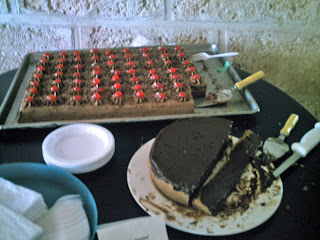 It’s not every day one gets to bid on exclusive Sports memorabilia in Barbados or have a chance to win a bid to have lunch for 4 at an exclusive Golf Club with a round of Golf for 4 among other goodies – all settled in nicely with enough chocolate desserts to create a whole generation of diabetics, LOL! JK-JK-JK!!

The Canadian Women’s Club of Barbados held a Dessert Festival & Auction at the beautiful surroundings of the Opa! Greek Restaurant in Hastings and the proceeds were for a number of children’s charities… Among the worthy goals? Plans to buy orthotics for child burn victims! 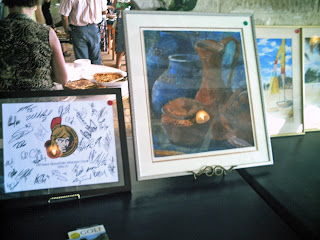 Last year they made a tad over 35-thousand Barbados dollars, for this year? They made close to 38-thousand bucks! Most they ever did too, h’mmm, that auctioneer did look familiar, eh? The joys of participatory journalism!

It really was indeed a joy to take part and be a part of such a generous event – on sale was an autographed Wayne Gretzky jersey now he’s a member of the Phoenix Coyotes (not very glad news for many Canadians, they felt he shouldn’t even have defected to the LA Kings), another hotly contested item was the Ottawa Senators logo framed and signed by the entire team. 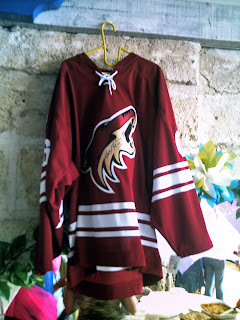 Then there was the ladies and gents leather jackets also from the Senators which are exclusive to Management & Players – they really had fun modelling these items – they eventually went to Jeffrey Fredenburgh of Alchemy Synergy (who I had the pleasure of meeting originally when the Earthrace was here what seemed a lifetime ago now)!

The desserts were all possible variations of chocolate – some from Daphne’s, others from Sandy Lane and apart from the sweet stuff, there were some proud saltbread representatives of what Bajans call a sandwich… Yup, cutters from where else? Cutter’s! Loved that peppersauce! 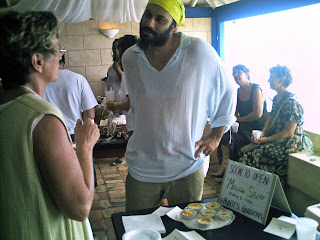 Back to the auction, a weekend for two at the Hilton with a bottle of Cuvee du Bailly; a mini-cricket bat signed by the entire Canadian Cricket team when they were in Beausejour for the CWC 2007; 4 days and 5 nights at Mango Bay … in all, 22 items were up for a live auction, there were still folk bidding from just before the live event on a silent auction. 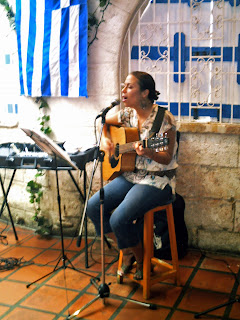 As the bids for that auction were made quietly, there were some very smooth and soothing music from Eliana Marcenaro – a teacher from Codrington School during the week, but a very able imitation of Shakira in vocals! A full feature on this songstress is forthcoming…

In all, it was great fun to be among cool folk with spending power and having their hearts in the right place!