BREAKING NEWS – HELL FREEZES OVER: cwc 2007 ALLOWS NOISE-MAKERS IN TO WATCH CRICKET, BUT THEY MUST “REGISTER” 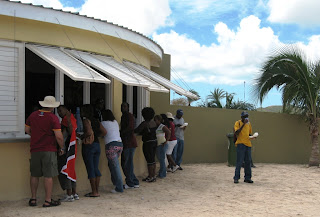 Now I may be wrong like how Smokey Burke usually is, but I think one of the main turn-offs for this CWC has been that West Indians cannot make noise like how they usually do during a match – no conch shells nor drums and trumpets!

Dehring & Co are refuting claims this is partially why matches are not full to the brim with spectators, apart from the astronomical fees for tickets and how foreigners bought a bunch of tix just to get the Super 8 Final and skipped the rest – they’re also denying that there was no danger in Antigua and yet at the same time citing the very danger they’re ignoring…

In light of recent press reports and interviews, which have surfaced in the media ? namely The Nation newspaper of , regarding the temporary closure of the east stand on Wednesday, March 28, 2007. World Cup Antigua Inc., Local Organising Committee for ICC CWC 2007 issues the following statement: 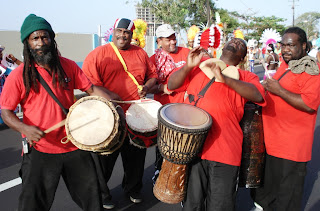 On Tuesday, March 27 a significant amount of rain fell and the match was postponed until Wednesday, March 28. The rains affected many areas of operation including the east stand. Reports were made by the safety stewards of persons slipping on the wet stairs. The area was also extremely muddy.

A decision was made by both the Venue Operation Centre (VOC) and Ticketing to temporarily close the east stand, as the excessive mud and water would make it precarious for the fans and staff to use the metal staircase… 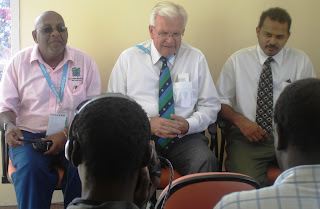 The Antigua and Barbuda LOC strongly denies claims suggested in the Nation Newspaper dated March 29, 2007, that the east stand is ?unsafe? and at no time was this implied in the interview given by George Goodwin Jr., Managing Director and CEO of World Cup Antigua Inc., Local Organising Committee for ICC CWC 2007. Such scurrilous reporting and headlines do more to damage the integrity of the event than inform the public…

As for the noise, the ICC’s top man had his say to Georgetown press, re: Caribbean crowds and making a joyous noise unto Lords’ et al – 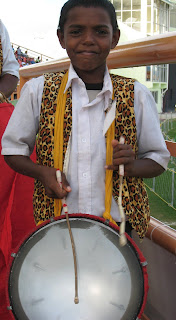 ?There is a protocol to allow musical items (into venues). We want the Caribbean atmosphere to be here. {Ed’s. Note: Hah!}

Musicians are permitted to bring traditional (conch shells, shak shaks etc.) or other instruments into CWC stadia once they have been granted permission by the relevant Local Organising Committee (LOC). [At] Guyana National Stadium, for example, members of Raghu?s Tassa & Taja Band were in full cry in the stands, their rhythmic beat luring fans from their seats to dance at every opportunity. 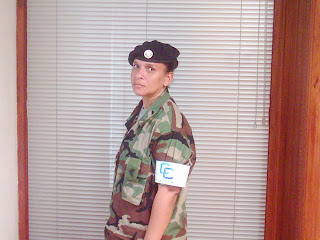 Nevertheless, I have to add, Trinis are so damn clever – I love their alternative version of suntan lotion! Go to B’dos Free Press and see how it is very true that a picture is worth 1,000 words! Finally those armbands for multi-national security forces make me feel so safe – I am sure they’re impossible to forge; and if Bob Woolmer were alive he’d be all choked up at the security given as a tribute after his passing, huh?