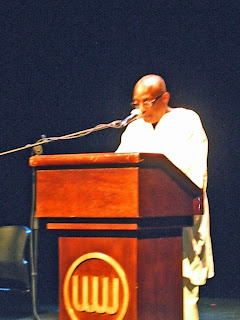 Luckily, the folk were kind and patient, reminiscing and catching up on mutual gaps of each other’s intertwined life histories so that the delay was not that noticeable. There were folk such as Carla Springer, Pro-Vice Chancellor Hilary Beckles, Dr Marion Williams – Governor of the Central Bank among other luminaries rubbing elbows and chewing the fat.

So when the Director of the Errol Barrow Centre for Creative Imagination eventually took to the stage, all was forgiven – the professor regaled the audience with the oft-quoted phrase from the Toronto Star of Mr Clarke being the angriest black man in Canada, and how the same paper showed how “Tom” evolved to an author easily compared with Homer, James Joyce and even the Bible itself! The University lecturer also demanded to see that Mr Clarke’s books be placed on all Barbadian schools curricula as mandatory reading.

Then Dr Yearwood gave way to what the audience really came for, to hear Austin “Tom” Clarke in his own voice playing with his own words… 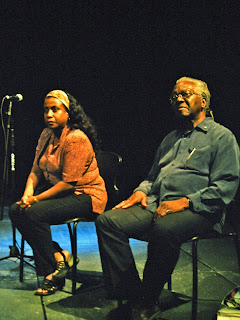 Mr Clarke is a storyteller so masterful at his vocal craft as he is masterful at his scripted self that it is not unkind to use the simile of an expert houngan at a town square spilling chicken blood and rum in patterns for summoning loas at his whim, perhaps with Baron Samedi too, and telling them when/where & how to dance and they meekly cavort as if they were cowed puppies awaiting a new task!

He spoke of the significance that bookshelves played in his life and that of Errol Barrow – the late Right Excellent National Hero – all in Mr Clarke’s still Bajan accent, which then gave way to an apocryphal story of watching Cabinet Ministers curse each other over dominoes as the then alive Mr Barrow shows Tom that privilege is when a black leader of an emerging Caribbean nation can choose to cook food like what slaves ate centuries ago, not because he has to, but that he just felt like it! What a delicious helping of Pig Tails ‘N’ Breadfruit!

Mr Clarke’s 2nd reading came from the very start of The Polished Hoe and what with the effective pauses, I could not help but realise the story is better delivered like griot and wondered if Mr Clarke will ever sit down and undertake such a venture? He easily earned a sweet encore for which he readily complied – it was the tale of when Sargeant fell for a Trini lady and how a fountain pen with royal blue ink was an integral role for the courtship…

Nevertheless, there is also brilliance in “Tom’s” brevity – when an audience member accused him of giving conflicting dates for how long it took to write The Polished Hoe and when composition started, the reply to what is the correct date was poetry in immobility…. 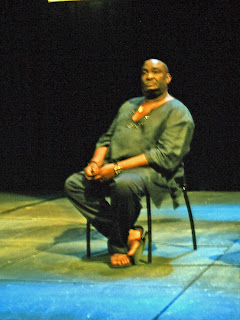 Chaos in the market scene! Such laughter, needless to say, the man kept his peace for the balance of the night.Colin Taylor of the Obsidian Theatre told participants that between himself and Alison they sought to stay true to the “central spine” of the story, but they both see The Polished Hoe more as film than any other medium.

Alison Sealy-Smith was very quick to point out how the dialogue came straight from the book. She also spearheaded a Canadian cultural exchange to get the book-turned-play from Ottawa to Church Village.

Tony (Sargeant in the play) Thompson, dramatist/teacher/announcer asked how different are the acting standards in Toronto from Bridgetown and he declared they’re worlds apart! Joanne Reece who plays Gertrude, credits her earning an audition by leaving a voice mail at Obsidian that she is the only Bajan in Canada! 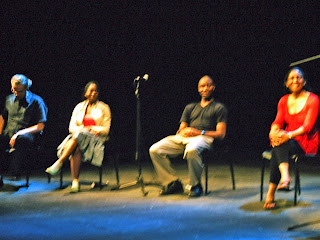 Jamaal Grant told people if they want to see how the non-Barbadian cast jockeyed into a Bajan accent, he challenged them to come and see how it’s done! Jajube (JAH-JOO-BAY) Mandiela (MAN-DEE-AY-LAH) says this is her 2nd theatre effort and is more accustomed to screen works!

The dark horse was the man who was selected to play Mr Bellfeels, he is rather laconic, a bit like Leonard Cohen who also hails from Montreal – except John Blackwood is a dude who grew up in Jamaica! He is very au fait with Caribbean lifestyles! He shifts accents from Jamaican to Canadian like how a driver gears up and down the tracks of Indianapolis… In his view, both black and white tell the full story of all the Caribbean.

Bajan Reporter asked Mr Clarke if there are plans to set his works to MP3, 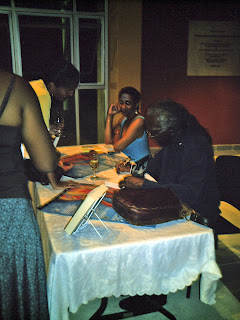 iPod or Books-On-Audio and while he wants it done, he wants to see another person than himself read the works, but he is meditating constantly on that decision…

After the discussion, there was a chance to get a number of Mr Clarke’s ten novels as well as for the ex-CBC General Manager to personally autograph whichever book was chosen!

Tonight will be the gala opening and then the all too short run from the 25th to the 29th of April – hopefully a public or private sector entity will sponsor similar future ventures to make their run last so much longer for it to have an effective reach to Bajans dying for culture!