They came, They Heard, They Blogged – BBC LiveFive with Barbadian & Trini’s views on CWC 2007

Well, I had my 15 seconds fame with the BBC tonight… I was worked into a frazzle originally for Saturday night, had called to reconfirm – only to learn they meant Monday after the WI vs Zimbabwe match! 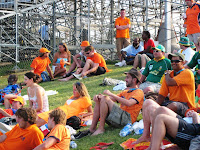 Re-geared the engines over Sunday night (what a pain, no karaoke nor partying for the usual weekend chaos, bummer) and waited the whole day for 9:15 pm to drop in like some ninja version of Cinderella… What did I do in between? Research!

I learned how 37 is a key number in the West Indies tour of duty so far – Lara is 37, and Lara was out on 37 in their first victory as Pakistan too played the 37 game when Mohammed Yousuf was caught by Denesh Ramdin and bowled by Dwayne Smith for the same 37… Leading to some folk wanting to play that number in the lotteries here! I became very educated on this sport of glorious uncertainties…

I also learned how a guy wore a Santa hat as it felt like Christmas since it had been so long since the Windies played this way; India made history in Trinidad when they racked up 413 (to make up for their loss to Bangladesh? I guess they want no more homes destroyed nor for any bank accounts seized – if Pakistani fans and some Indians had their way); The Scottish team make an anti-AIDS/HIV tour to a Kittitian secondary school; the number of pretty gals at Sabina in today’s 2nd match; the water-bottle issue versus the conch shell; Freddie Flintoff‘s punishment being ridiculous when you consider the history of the Irish for drinking if sad or happy – what did you think the lads of the Emerald Isle were doing after they trounced Pakistan? All of that and still more, I was READY!

In the end, I felt like the guy who swore if he got on Millionaire that he would burst everyone’s melts, and when actually on the hotseat is thanking God to reach 64,000 dollars after expending all lifelines for questions you know but can’t recall at the heat of the moment! I was on with a fellow blogger, a Trini gal by name of Georgia – who was also brief to my mind, not for us having lack of knowledge so much as we weren’t given enough time!

The announcer asked us mostly about today’s game – I tried to bring in the Pakistan passion over losses compared to the Caribbean quasi-Colonial wish for sacking approach, but the guy barrelled along with his own agenda – please understand, this is not the guy who originally e-mailed me on the basis of this blog, BTW!

So it seemed to me that we were done in about 90 seconds, if so long, and they thanked us and clicked off – all of that preparation and so little to show for it… So, when’s the next date? LOL