If you’re looking to do something on Easter Saturday and cannot abide by avoiding your carnivorous habit for Lent any further, then you need to get Pun De Grill, no not actually on a BBQ, just get some meat and enjoy the performance of a guy called Anansi

Bear with them, their website is still under construction, but they have basic info out there for everyone – their number; the fact they’re located on St Lawrence Gap; and they got a chef called Hassan Gibson to heat the barbie! Plus a young fellow will be performing who goes by the name of one of the most famous tricksters in the Caribbean… Who? No not that politician, I mean Anansi at Pun De Grill next Saturday! 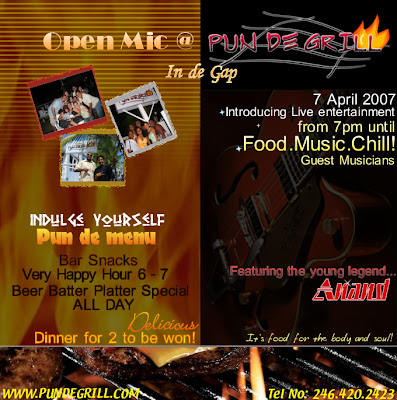