Well, be careful of what you want, you may very well get it! Subsequent to being defeated by at on St Patrick’s Day 2007, no longer have any chance of qualification for the Super 8 stage of the ICC Cricket World Cup, as the team all came under fire after the humiliating loss to Ireland there is a fatality before the return home…

As you’ll recall, the boys from the Emerald Isle are sitting on three points after their nail-biting tie with Zimbabwe on Thursday March 15 netted them a single point to add to the two points they collected in their St. Patrick?s Day triumph, placing them at the top of Group “D.” 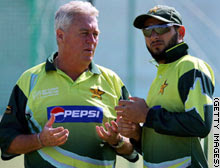 Now, Pakistan coach Bob Woolmer has died in hospital today after being found unconscious in his hotel room. In a Breaking News alert from CNN, it said how the 58 year-old coach watched his team crash out of the World Cup on Saturday after that unexpected Group “D” defeat by Ireland at Sabina Park.

The former England batsman was made coach of Pakistan in June 2004; the job of coaching the national team of the cricket-crazy country is considered one of the most pressurised in the sport. Angry fans took to the streets in protest and burned effigies of players on Sunday. Protesters held a mock burial of the team … in Hyderabad city, while posters and effigies of Inzamam ul-Haq and Woolmer were burnt in Multan.

Many of them pleaded emotionally for the government to withdraw all awards given to the players and management and freeze their bank accounts.