Jamaican Rednecks -Vs- Barbadian Conservative Liberality: Getting to the bottom of an issue 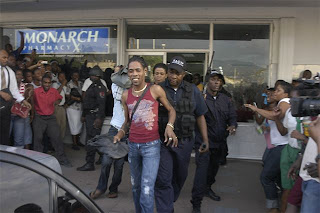 Got this item in my Hotmail account the other day, it made me think, my opinion expressed may get me branded as a batty-boy but if you can get past the simplicity of the argument you may understand what I am trying to draw reference with?

This is an item taken from a Jamaican online daily, it is the 21st Century and we have a bunch of heterosexual Jamaicans behaving like the old days of the south when rednecks would hang Jamaica’s black USA cousins by the dozens – but not for who they screw, but what skin they were born with! It seems to me the lynching is for very similar reason, exaggerated fear over small or superficial differences…

It is also intriguing to see how it travels across cyberspace – this story broke actually on February 12th made the Observer on the 15th of that month but did not reach Barbados until the start of March!

My thanks to Tracie, she sent more photos than what the article had, and here is what the Observer had to say –

THREE men branded as homosexuals were yesterday rescued by the police from an angry mob outside a pharmacy in Tropical Plaza, where they had been holed up for almost an hour. 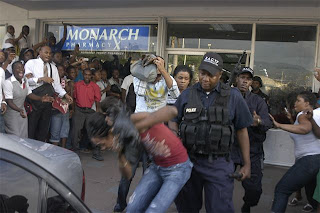 But even after the police managed to take the young men from the Monarch Pharmacy, one of the three was hit with a stone, forcing officers to fire tear gas on the crowd which included men, women, teenagers and small children.

The approximately 2,000 people gathered outside the Kingston pharmacy hurled insults at the three men, with some calling for them to be killed.

The crowd grew larger as the minutes ticked by and the three men and staff inside the pharmacy were visibly terrified as the mob demanded that they be sent out so they could administer their brand of justice. 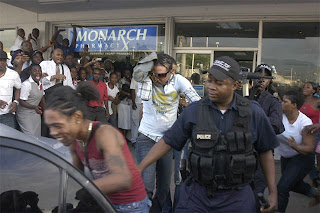 “Send them out!” shouted one man. The men, who all had bleached-out faces, and dressed in tight jeans pants and skimpy shirts, were saved due to quick action by police from the St Andrew Central Division.

When the officers arrived and attempted to push the crowd back from the front door of the businessplace they were greeted with some resistance and when they attempted to escort the men to a police service vehicle, which was parked near to the entrance of the pharmacy, one of the alleged homosexuals was hit on the back of the head with a stone as he flashed a wry smile before attempting to hustle inside the police car. 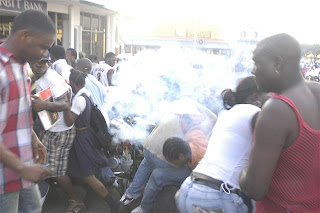 The cops were forced to disperse the large mob by dispensing tear gas canisters and whisking the men away as the crowd scampered in all directions in an effort to escape the irritating fumes. One man in the crowd was determined to get a chance to beat them and hurled insults at the police when they drove out of the premises.

“Unu can come save them nasty boy yah? Them boy yah fi go down,” the man bellowed. One woman expressed surprise at the brazenness of the men who were clearly displaying effeminate behaviour.

“Jamaica has lost its way if men think they can openly flaunt being gay without any consequences. We don’t want that kind of open gay life in this country,” the woman said.

Homosexuality is frowned upon in Jamaica and gay rights groups have constantly branded the island as anti-gay. Under Jamaican law a male can be slapped with a sentence of up to nine years if caught in a compromising position with another man. 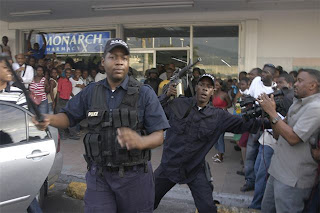 Now, Barbados has similar laws yet we are more tolerant, so much so, we get branded as Bull-bados by some stupid Jamaicans, ironically Jamaicans have a saltbread kind of loaf known as a bulla, but we don’t give them fatigue over it!

I think Bajans for the most part know they have particular laws but the way they see it? So long as you do whatever you do in private, and not involve children then we cool…

What Jamaicans have to accept is that if they are a bigger island then they will, by corollary, have more gays and lesbians on their turf! The same Observer has an article on Police who fit that category…