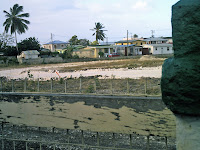 Now when the backhoe and open-backed truck trundle and grind their way towards my utility pole this Saturday, my cats are fighting between themselves and I learn early this morning that my neighbours across the once-empty lot (now the proposed site for Emmerton relocatees – last is my invented word) not only are their cats terrified for the construction/destruction, Mr Small’s wife wants to sell their home and go back to the USA!

That’s the typical inverted pyramid capsule for a genuine News item, all the juicy meat up front then go over other details that can be dropped if pressed for time, total opposite of telling a story where you build a crescendo then WHAMMO – hit the reader or listener with the punchline! This new soundbite method of conveying data is probably part of the reason nearly everyone has attention deficit disorder syndrome! 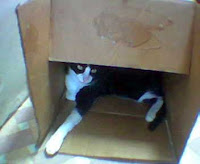 Anyway, as those who follow this News-Blog will recall, I have been trying since last year to campaign against the disruption to my residence of this plan to move folks from Emmerton to literally right next door to me without so much as a by-your-leave!

The last entry touched on if the relocatees would get houses or high-rise apartments – the latest development came this morning when I was moving my car to let out my wife so she could go and be a workaholic for the early shift at probably the best hotel in the island. 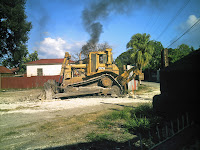 I saw Mr Small, the other Strathclyde neighbour on the other side of the field where all of the destruction/construction is raping our neighbourhood, who was on his morning walk and I decided to ask him his views on the whole thing…

What a great thing I did – he came to similar conclusions independently of yours truly… His cats which would roam the district now stay at home most of the time, and they are rather skittish now; he didn’t know what happened until he asked one of the construction workers what happened and learned about the Emmerton issue dropping on his lap just so; his wife (BTW: they are part of the proof that Strathclyde is no longer a gated community – he is a fine distinguished black gentleman with a lovely spouse who happens to be white) wants to just sell their property and go to the USA – but this is not sitting well with Mr Small…

He more or less said, what can he do? He wants to stay, but then he doesn’t know what he’d be getting when these people transfer here – and Mr Small sees it all for what it is – trying to earn a few votes before the time comes. He tried reaching the Reverend Joseph Atherley but to no avail, even though his constituency office is relatively near – Mr Small has just about surrendered.

I have not, I called the Constituency Offices of both Atherley and Farley – Reginald Farley is the Housing and Lands Minister (I studied Spanish with him years ago at the Venezuelan Cultural Institute in Hastings), but only the voice mail was on at his office; I had a very long talk with Heather Greaves at the Reverend’s place – I even told her of this blog and its commentary and views! She has promised to get back in touch and seemed surprised that no representatives from the Housing Ministry would have come by to inform Strathclyde residents of what was coming… 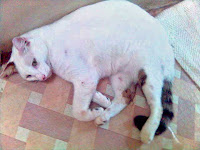 In addition, when I realised the destruction workers got very near my wallaba post and I took some pictures, one of the men was threatening me to not take any photos and I shouted at him that I am on my property and I will do whatever I deem necessary to protect it… He got real quiet, real fast!

As for my poor children? Patch – one of my two “sons” – was in a faight with his “aunt” Mimmo over what? I do not know, but all six cats and 1 dog were in this morning for fear of the machines. My diabetic mother cannot get a nap in the day now with the noise from the trucks and tractors! 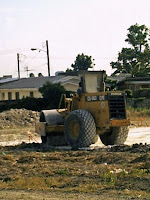 I have no wish to leave here nor sell it, I have worked too hard for this place, and at today’s prices from seven years ago I do not even want to consider that! I am reminded of one of the characters from the Dune sci-fi series, Leto Atreides I, who created the family motto: HERE I AM, HERE I REMAIN – this is very similar to the Grant (my mother is a Grant from St Vincent) clan’s motto: STAND FAST; which is rather ironic when you consider Strathclyde is a Scots name!

Another thing I recall is when Malcolm X convinced ppl to use a ballot instead of a bullet to effect needed change… If Strathclyde folk are not respected enough to be notified, nor get a Town Hall meeting nor suggest that they receive some sort of compensation? Then maybe the ppl of Strathclyde need to examine all available options?

Heather Greaves actually showed up at my house only a few moments ago, this was a shock, she is a bespectacled young woman in her forties, reddish-brown complexion, with a large bosom contained in a red Sean John polo, along with blue jeans on two slender legs and a denim hat with a sunflower holding up the brim.

Ms Greaves says the houses will face towards where Shamrock supermarket used to be – but I said this is not what I am on about. I am concerned over a devaluation of property with new neighbours. I only recently had an evaluation to get a loan to buy a new car and do some renovations.

I added there are some who claim with reason, that Emmerton ppl have a brush with the law now and again; others who say quite a few of the young men are accustomed to lighting a spliff every so often – emphasis on often… If there is dope then there would be crime, but she claims she has gone to Emmerton and says there are no problems with the residents. That is her view and estimation, I asked if she went in the day or night and whether alone or in a group and she claimed a few solo occasions in morning or evening and nothing happened – as I said, this is what Heather Greaves has said!

She has promised to liaise with the Reverend, who she was supposed to see this afternoon, I also showed her where we had to have a utility pole replaced when a truck lashed it and how it still leans towards the Spencers – who also are thinking of pulling up stakes!